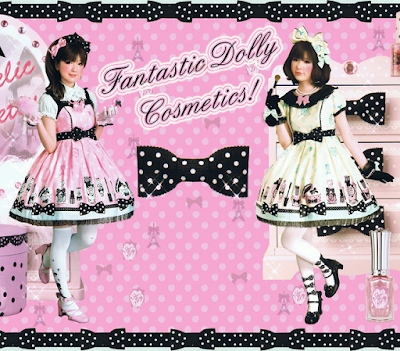 ♥ 10 random Lolita facts about you

We’re already at the last day of the 10 Day Lolita Challenge!
Time sure goes fast doesn’t it? ^^ For today’s challenge I will list 10 random facts about myself as a Lolita that you might not yet know. I feel like I have done this before somewhere..? Oh well, I’ll try to stay original!

Fact no. 1: I don’t remember how I discovered Lolita fashion. You’d think that something that would become such a huge part of your life would somehow make an impression, right? Not on me apparently. I do vaguely remember knowing about the term ‘Lolita fashion’ when I was reading the manga Death Note when I 15. I thought the character Misa was wearing Gothic Lolita. Of course that was incorrect, but I can at least judge from that I knew about it. Later on I got more interested in the fashion (aka obsessed), which I think was around when I was 16 years old.
Fact no. 2: The most expensive dress I own is either my Atelier Pierrot Reine dress or my Baby, the Stars Shine Bright Pas de Deux in the Blue Moon jsk. Both I bought brand new (pun intended) and were about equally expensive. My cheapest dress is my Baby, the Stars Shine Bright Dessert one piece, which I found at Closet Child for a steal!
Fact no. 3: Lolita got me interested in clothing in general. I used to hate shopping and had no interest in clothes whatsoever. I wore whatever was comfortable and hid my body, preferably black. School and my grades were far more important. Thanks to Lolita fashion I developed an interest in casual clothing as well. Now I love things like bags and shoes (although I still hate ‘normal’ shoe shopping)!
Fact no. 4: I recently celebrated my six year anniversary in the fashion! I considered myself a ‘true’ Lolita from the moment I wore my first coord, which was on December 10th 2011.
Fact no. 5: I met the French Lolitas before I had ever met my own country’s community. I went to the Angelic Pretty and Baby, the Stars Shine Bright Tea Parties in Paris and almost a month later I went to my first Dutch event, where I met part of my local community. I felt a bit like a snob, haha!
Fact no. 6: I am still not ashamed of my first Lolita outfit. When I started out in Lolita, many people had gone through a ‘terrible Ita-phase’, as they called it. I wanted to start out in a way that would make my later Lolita self proud and so I waited until I had a full outfit. Still no regrets (except perhaps about the colour of the shoes. I still don’t own lavender shoes).
Fact no. 7: I actually met a lot of Lolita models, designers and well-known figures! Sometimes I still can’t believe I met a lot of the people I looked up to as a young Lolita. I met Maki, Asuka, Midori Fukasawa, Misako Aoki, RinRin Doll, Akira, Yu Kimura, Kira Imai, Babi, Kaie, Masumi Kanoh, Akinori Isobe, Yuko Ashizawa, Aya Nimura, Mari Nakamura, Mariko Suzuki and was in the close proximity of Risa Nakamura and Chikage. Whoa…
Fact no. 8: I can tie really pretty bows and I really like doing it. So much so that I tend to stalk people around if their waist tie bows aren’t pretty until I can redo them, which rewarded me with the unofficial title ‘the Bow Ninja’. x)
Fact no. 9: A lot of Lolitas have specific themes or prints they really like and are even associated with, like chocolate prints or bunnies or ponies. I however don’t really have that, so I went on to ask my Facebook friends whether there is a specific dress or print they associate me with. I got a lot of different answers, which was actually really nice, but two recurring answers were: Jewelry Jelly and Promenade de Paris, which made me really happy!
Fact no. 10: Lolita fashion has made very sad at times, but it has also made me incredibly happy many, many times.

This was the 10 Day Lolita Challenge! I hope you liked reading along or maybe you even participated? Do let me know, I'd love to read your answers!