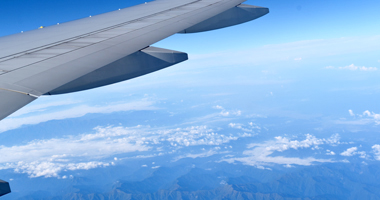 Hi everyone, today I am starting my Tokyo 2019 series! I had an amazing time and am excited to tell you all about it! I went to Japan with my mom from September 29th until October 8th. Originally, I was supposed to be studying in Japan for three months starting April 2020, so going on this trip felt a bit excessive. However, due to some problems on our previous trip and just really wanting to go with just the two of us again, I was lucky enough to fly to Japan once again with my mom before I went on my own. However, thanks to the current crisis, my study abroad was cancelled (let’s not talk about how many tears that cost me), so I’m extra grateful I got to go on this trip before everything turned around! Alright, without further ado, let’s start~!

On Sunday September 29th the day had finally come. I had been working very hard during the weeks prior in order not to get behind on school while also packing, but now I could leave all those things behind me, as we would embark on our trip to Japan!
My dad would initially drive us to Schiphol, the airport, but since traffic was pretty jammed, he drove us to the nearest station to the airport and we took the train from there. Once there, we checked in our suitcases, went through security and pretty soon found ourselves within the airport! 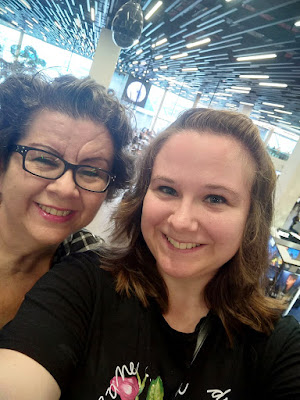 Mother and daughter, ready for a new adventure!

We walked around for a bit, browsing the stores and doing some people watching. I really love Schiphol airport, I could easily spend hours there. As always my mom liked sniffing some nice perfumes, while I insisted on taking a picture with Miffy. 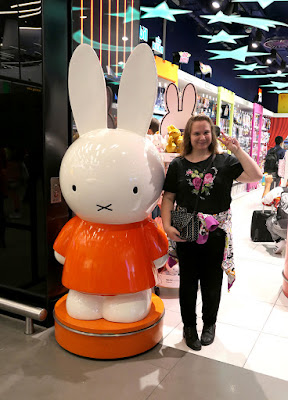 We decided to have some snacks and ended up getting drinks, pastries and a bag of potato chips at one of the nice cafés. I was feeling quite hot, so I ended up sticking my Cola down my shirt to cool off. XD The pastries were very nice and the potato chips delicious, so that was very nice. ^^ 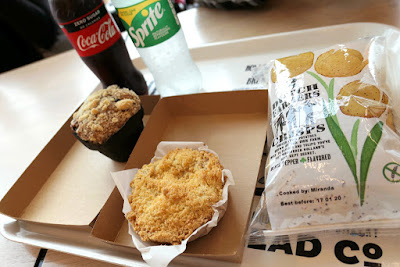 Our lunch at the airport.

We browsed some more stores, particularly the touristy ones. I love looking at souvenirs from my own country. I was especially enamoured with a shop that sold all things tulips. They had one side panel in the wall completely covered in magnets of clogs with tiny tulips. It looked just so cute! ♥ 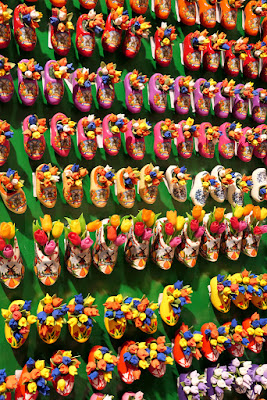 These magnets looked so cute in bulk!

My mom and I decided to head for our gate, but while walking in that direction, we came across the Rijksmuseum Schiphol, a small exhibition by the famous Rijksmuseum in Amsterdam, where real art pieces from the 17th century were displayed! Of course we wanted to have a look, so we walked in. I was especially impressed by Abraham Mignon’s ‘The Overturned Bouquet’, which depicts a beautiful flower vase accompanied by a very ugly cat. I loved the cat especially, it looked so funny and cute. XD 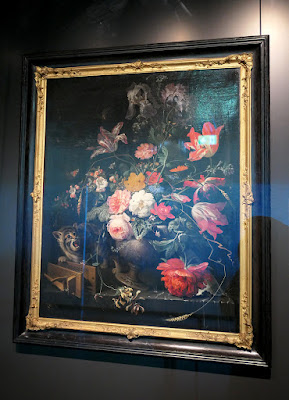 That cat seems to be having some issues, right?

While I was admiring the art, my mom was admiring… the gift shop. XD In her defence, they had some really nice art-themed items. She especially liked a statue of an elephant decorated in Delft blue.
Finally, we headed for our gate, passing another Miffy, but once we arrived there, it was really quiet. We sat down and waited for a bit, but there was almost no one. When I checked my app, it turned out our gate has changed! So we headed for the right one, where a lot more people were waiting and there was a plane already visible. 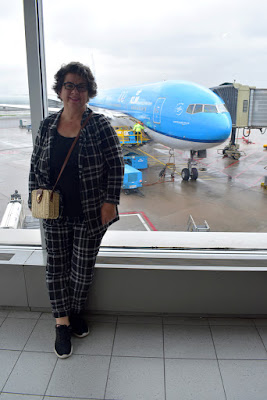 Mom posing in front of our plane.

We waited around for a bit until not long after it was already time to board! We had our passports checked and entered the long hallway towards the plane. This was the moment to leave my mom alone for a bit. She is actually really afraid of flying, but keeps doing it anyway! How brave is that? I am always impressed.
We entered the plane and walked to our seats, somewhere in the back of the middle. I sat down at the window and my mom in the middle, soon joined by a very nice Dutch lady. I texted my dad and friends and then turned off my phone. 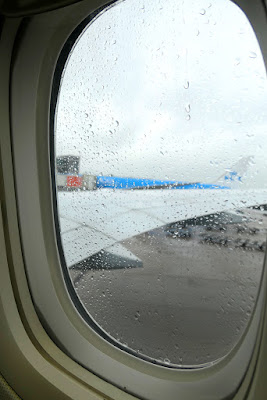 A rainy Netherlands behind the window.

Before we knew it, the plane started moving! We drove to the take off strip and I looked out the window while holding my mom’s hand. Soon the plane started speeding and we took off! My mom hates this moment, but I love it! ♥
My mom soon recovered and we settled in for the 11-hour long flight. The flight was uneventful. The food was lovely as always, I watched some series and watched the Japanese movie ‘Masquerade Hotel’, which I had wanted to see for a while and which was really good and exciting! 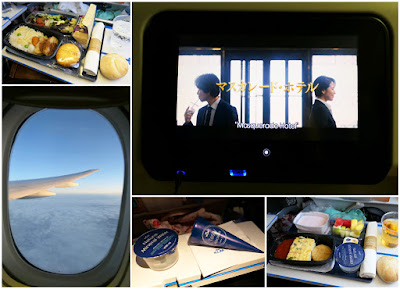 Food and views on the plane.

I also tried to sleep. Sadly I rarely sleep on planes, plus for some reason I was really hot like, all the time. For some reason our part of the plane was quite warm. I felt quite icky at the end of the flight, oh well.
Finally, after about 11 hours, we were almost there! The windows were opened and the morning sun shone into the plane. Soon after, Japan’s coastline came into view! 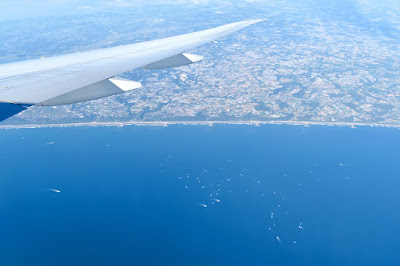 Not long after, the wheels of our plane touched the ground. We had arrived in Japan!

Even though our flight, arrival and first day in Japan felt as one long day because of time zones, I count the flight and arrival as day 1. ^^