A Few of My Favourite Things: Sunshine in Forests 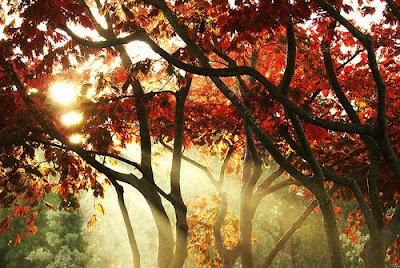 Oh my God, April is almost over already and this is only my third post! I always tell myself to try to write at least five entries a month, but I don’t think that’s going to happen. I’m afraid next month is not going to happen either, because of my two weeks of exams. Well, at least I warned you!
However, I’m very loyal with my Favourite Things posts, as you can see. ^^ I really like to write short stories about things I appreciate in life.

The weather in the past week was incredibly pleasant! The sun was very warm and we could sit in the garden all day, while at night the temperatures dropped and we could sleep underneath soft blankets. I noticed that, since I lost weight, I appreciate warmth more. I can sit in the garden, the sun shining on me, without thinking: ‘Ok, now it’s really getting too hot!’
I actually wanted to write a post about sunscreen (if that’s the right word). I just love the smell of sunscreen… It reminds me of the beach and the ocean. But I couldn’t find a good picture of a bottle.
Instead, I chose the Favourite Thing that came closest (yes, I have a whole list ready): sunshine in forests.

You know: those pictures of a forest with sunrays beaming through the open spots between the leaves. Those pictures, that often clearly show what season it is. Pictures with snow, red and yellow leaves, falling leaves…
God, I love those pictures! I always wished to once, just once, walk through a forest while the sunrays are just like on one of those pictures. That never happened up until yet. I guess I just have bad luck.
I’ll add a sunshine-filled forest to my imaginary Fantasyland until then. ^^
op 8:40 PM 4 comments:
Email ThisBlogThis!Share to TwitterShare to FacebookShare to Pinterest
Tags: favourite things

An Easter Bunny Has Appeared! 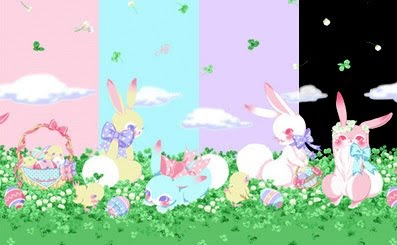 I’ll admit it: I haven’t been feeling very well these past weeks and I think it will take a while before I will be fully ‘recovered’. I’ve been feeling very, very insecure lately. My official exams are coming up (16th of May – 27th of May) and I am incredibly nervous. But not only that, I’ve become very insecure about my appearance too. I absolutely hit rock bottom last February, when I, after weeks of crying and avoiding the mirror, fell into what I can best describe as a ‘panick attack’. I really didn’t know what to do and I hated myself so much I felt like the world wouldn’t care about me anymore. Luckily, those feelings are mostly gone, because of the wonderful care of my parents and one of my friends.

Last Monday, after finishing musiclessons, I walked outside of the school building. In front of the building, there was a group of five people chilling and smoking. Three guys, two girls. When I walked by, one of the guys whistled in the ‘fwee-fweet’-way, like when you do when you see a pretty girl. I ignored him, but couldn’t stop overthinking why he did that. Especially when one of the girls said something about ‘ugly’. I couldn’t help but think she was talking about me. I couldn’t imagine for one second that guy actually thought I was pretty…
I felt so awful that I wrote both an email to one of my friends and a message on Tumblr, just to write it off me. I received some wonderfully kind responds that really made me feel better (thank you so much again)! One of them gave an example of herself while wearing Lolita and that I have to feel more confident. She was right of course. ^^ I chose an outstanding fashion. I have to feel confident if I want to wear it and I do want to. So I chose to do something… odd.

Yesterday we had a little Eastercelebration at school. Nothing special, eating and a movie (The Hangover, can you believe it?). I wanted to wear something I felt confident in, so I decided to dress up in an outfit I really liked and combined it with… Easter Bunny ears! 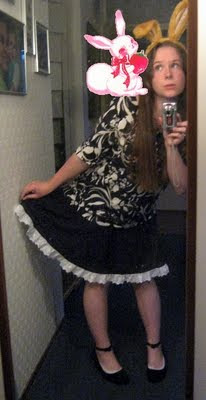 Cherry Berry Bunny approves!
Yes, I’m a silly girl. Why did I do this?
Well, I just needed to feel happy again! And by wearing these outstanding ears I knew I would draw attention. But I totally didn’t care! I liked my outfit, I liked the ears for the occasion… Yes, I got strange looks, but quite some positive reactions as well! After a while, I totally forgot I was wearing them! These ears seriously made my day. And if such a stupid, small thing can make me happy, I know Lolita is definitely worth the trouble!

No Lolita-outfit yet, *sigh*. Unfortunately, the shirt made me look bigger than I am on this picture. XD But I finally noticed that my arms and legs are thinner! It’s finally hitting me..! 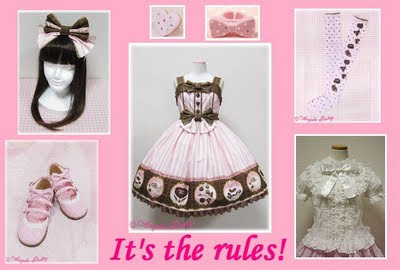 A couple of days ago I was talking with my friend Nicolette on msn. Nico-chan is one of the few friends I actually tell Lolita-related things and show dresses to. Although I keep my Loli-obsession at a very low level outside of my safe, she actually knows some things about Lolita I never really tell my other friends (beside Tiana actually).
So the other day, we somehow got to the topic of the few Lolita items I own and in particular my dresses. Nico-chan asked me why I haven’t worn one of them. ‘Because I’m not sure I’ll fit into my Starry Night Theatre JSK the way I want to.’ I answered. She asked about my Baby’s JSK. ‘That one fits great.’ I said. She asked me why I don’t wear that one then. ‘Because I don’t own a blouse yet.’ was my short and simple answer.

Because I don’t own a blouse yet. To us Lolitas an answer like that is as clear as mineralwater. But to outsiders this must sound like a stupid reason. So you don’t have a blouse. Wear the dress without one, no big deal! To us, it’s just wrong. You can’t wear a jumperskirt without a blouse, that’s against the rules!

‘Really?’ Yes, I’m going that way: Lolita and the rules.
When you start out as a Lolita and you ask for advice, one of the first things you’ll find/hear is ‘Read the Lolita Handbook on LiveJournal. It tells you all about the fashion and the rules.’ The Lolitafashion is build up on a bunch of rules. Don’t show too much skin. Wear knee-high socks or over-the-knees. Wear a petticoat with the right shape. Make sure your petticoat isn’t showing. And ofcourse: always wear a blouse underneath a jumperskirt.
In the Lolita-world people seem to be divided about the whole concept of the rules. Many think they must be followed under any circumstances and won’t hesitate to tell other people about what they did wrong. Others consider them more like guidelines and feel free to experiment with colours and combinations. Whatever you consider the rules to be, your opinion will, most of the time, collide with the opinion of someone else.

Now, I cannot speak for other people, so I will restrict myself to my own opinion about the Rules of Lolita.

Now hold on, before you move your cursor to the right corner of your screen to click the red ‘X’, let me finish!
When I first got interested in the fashion, I was overwhelmed by all the restrictions and things I had to remember so I wouldn’t fail. But you know what? Reading all those rules actually gave me some support! To me, the Lolita Handbook was exactly what it’s supposed to be: a guide for the beginning Lolita and although it’s written quite some time ago, I still recommend it to any newcomer in the fashion.
Now I’m way past the stage of big insecurity. You’ll never hear me say I’m a Loli-expert, but I do think I know a lot more than when I started. ‘So the rules aren’t necessary anymore for you?’ you ask. Maybe, maybe not. But like I said: I like the rules. I love the fact that you have to wear knee-socks/over-the-knees. I love the right shapes for petticoats. And I adore the blouse+jumperskirt-look!
I’m not the kind of girl to tell other people about where they went wrong. I might think it, I can’t help thinking, but saying? No, probably not. Who am I to ruin someone’s happy feelings about a coord by saying ‘You’re doing it wrong?’
But I’m also not the kind of person who disapproves of colouring outside of the lines. I love experimentation with Lolita and I’ve seen amazing results! But for now, it’s not for me yet. I’ll just stick the rules for as long as I want to and I like it. So waiting for a blouse it is.
op 11:25 PM 14 comments:
Email ThisBlogThis!Share to TwitterShare to FacebookShare to Pinterest
Tags: discussion
Newer Posts Older Posts Home
Subscribe to: Posts (Atom)