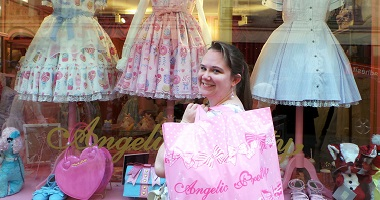 On Saturday July 7th we woke up at a decent time and had breakfast downstairs. I don’t remember what we had planned for that day, but whatever our plan was, we ended up changing it. On that day, Angelic Pretty would release some special sets, including one Romantic Rose Letter. I have loved that print from the moment I saw it online, but I never had the chance to buy it, until now. I wasn’t planning on buying it this time either though, due to some other circumstances. However, since I had been talking a lot about it, back at the hotel room my mom said: ‘Are you really sure you don’t want to buy it? Because I think you should.’ I was still in doubt... And that would mean we’d have to leave for the Angelic Pretty store within a few minutes! But my amazing mom was totally fine with it! ;0; ♥ So we jumped into some clothes and went on our way to the Angelic Pretty store!
Once we arrived there, there was only one Lolita there already. I’ve met her before and she always looks amazing, but unfortunately I forgot her name… I’m sorry, beautiful Lolita! We waited for a while until we got pieces of papers with numbers again and again I had number 3, since number 1 was gone again. XD 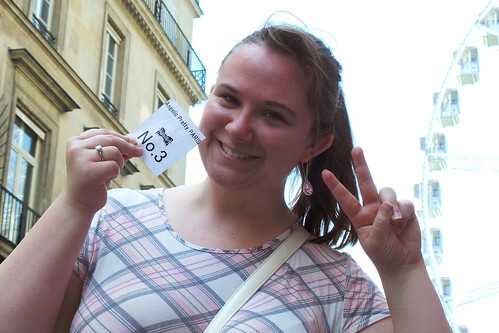 Soon more Lolitas gathered (I looked so plain compared to literally everyone, but well, I had to hurry) and we all looked into the store longingly. Some of my fellow Dutch Lolitas came by as well, which was really nice, as we had a nice chat and they were very excited to go to the Tea Party the next day as well. ^^ 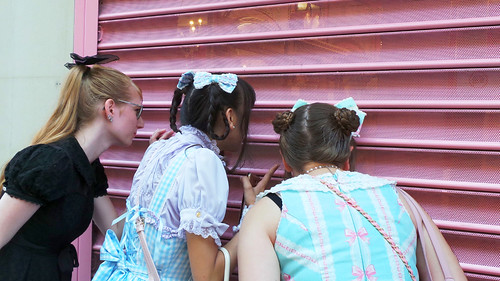 What will be for sale..?

The pink shutters opened and we lined up according to our numbers. When I entered I immediately dashed for the Romantic Rose Letter sets. I had planned on getting the sax blue set and when I looked at the other option, the lavender, I knew it was the right choice for me!
I looked around in the store a bit more, but there was nothing else I wanted to buy, so I paid for my beautiful new dress. And because I spent over a certain amount of money, I got to pick one of two options for a free notebook! I chose the adorable white version. It even came with a pink Angelic Pretty pink that even has pink ink! Filled with happiness I left the store. 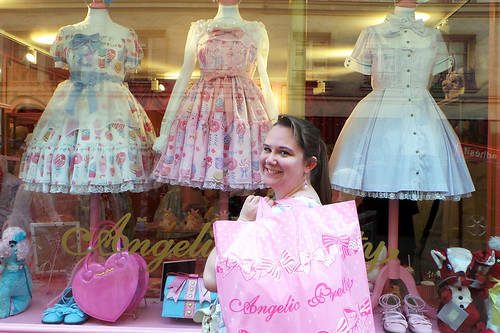 Happy with my new dress!

At one point, Marina and Roxane joined us! I gave them the gifts I had brought for them and Marina gave me something too: a CD of the musical Roméo et Juliette! I was so surprised and so happy! It was just the best gift! ;0; Marina is just too sweet! ♥ 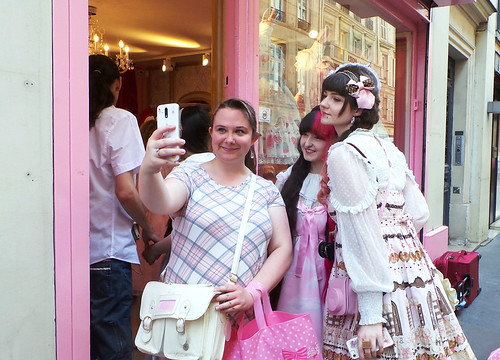 I really love this picture of me with Marina and Roxane!

I said goodbye to everyone and see you later to others, as that afternoon I would have my meet&greet with RinRin. My mom and I returned to our hotel. At our transfer station, we heard the music of a group of Eastern Europe musicians we’ve come across before in Paris and my mom loves them, so we went to have a look. I ended up buying my mom one of their CDs!
Back at the hotel we rested for a bit and got changed into proper, nice outfits for the rest of the day. We had brought way toon ice outfits for them not to be worn! 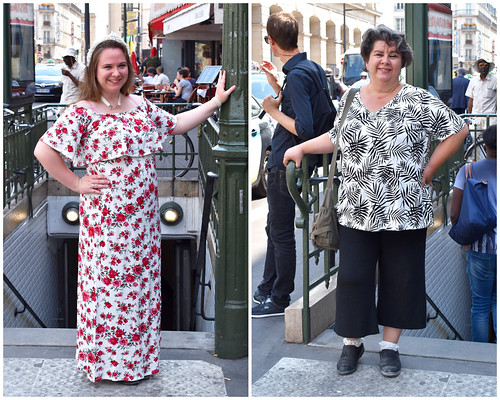 Our outfits later on the day.

We then went on our way to the Champs-Elysees. We love to just stroll down this long, beautiful street and more importantly: the Arc de Triomphe is there! At station Charles de Gaulle - Etoile we walked past a cute tourist shop that had really cute key chains: pink macarons with all the letters of the alphabet on them. My mom got an ‘E’ for herself and an ‘R’ for me! 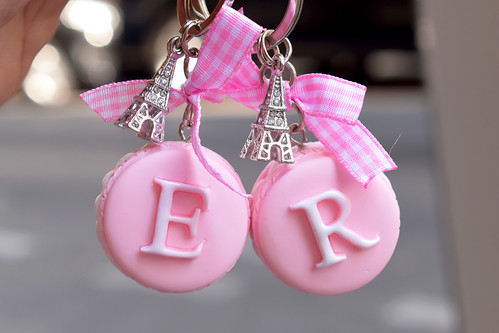 We went up the escalator and saw the beautiful monument surrounded by busy traffic right in front of us. As the sky was our favourite kind (blue with white clouds) we couldn’t resist taking many pictures of and in front of the Arc. 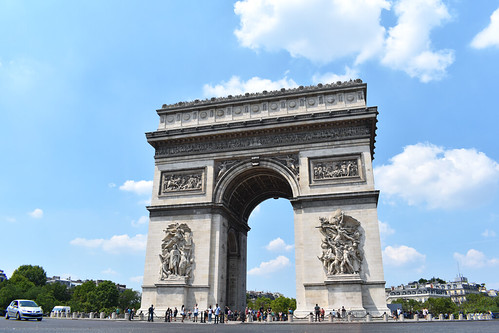 My favourite tourist spot in all of Paris: the Arc de Triomphe.

If you are ever in Paris, I really recommend going to see the Arc de Triomphe. You don’t even have to go up to the top to appreciate it (although it is very nice, more to come later). It’s so beautiful and detailed, it’s really my favourite tourist spot in Paris! Also, it has a connection with Napoléon so yeah. ^^ 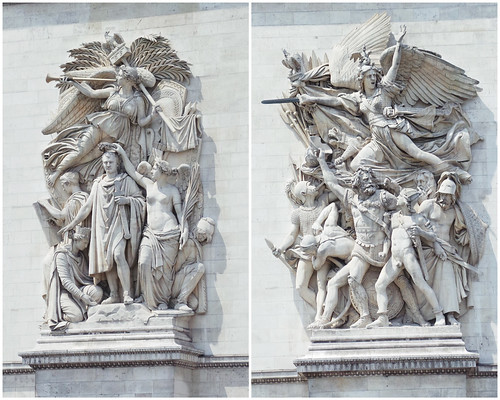 We even asked someone to take a picture for us! We honestly don’t do that much, as it can be such a hassle. Even though there’s another man in our shot, I’m happy to have a picture together with my mom there! ♥ 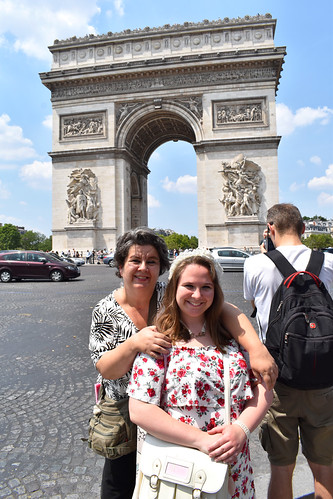 I really like this picture of us! If only that man wasn’t there… XD

After that, we strolled down the Champs-Elysees, looking at some shops and the many tourists surrounding us. Eventually, we decided to have a little luxurious moment for ourselves and went to have ice cream at the terrace of Laduree. Of course it’s quite expensive, but we wanted to treat ourselves. We had to wait for a bit until we were seated and looked at our options. At Laduree you can have some of their pastries in ice cream version in summer, which I can honestly recommend. Both my mom and I had an Ispahan, which contained raspberry sorbet, rose ice cream, raspberries, lychees, chantilly cream and meringue. It was, so good! 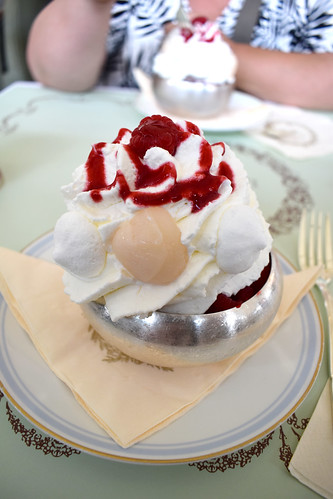 A Ladurée Ispahan in summer style!

Unfortunately, I had misunderstood the circumstances of the meet&greet with RinRin a little, so we hurried back to the store, where I was able to meet RinRin again, chat with her a little and have our picture taken. I am glad she liked my outfit, despite it being not Lolita. The picture was then pasted onto a cute Angelic Pretty Paris paper and RinRin wrote a little message on i tand signed it. It was an absolutely lovely encounter! ♥
After the meet&greet we all took a picture together in front of the shop and RinRin took some videos of people’s outfits, including Marina’s and even mine! I wonder if she still plans on making a full video about it someday. 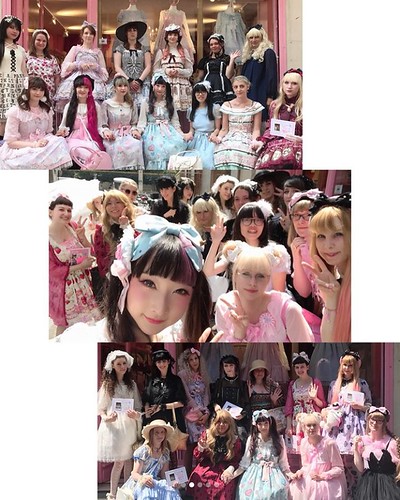 Cute pictures from RinRin’s Instagram. Can you spot me and my friends?

Meanwhile, my patient mom had been sitting a bit further away from the store and just observed. She took a lovely picture of everyone taking a group picture as well, that really shows you the gorgeous location of at Angelic Pretty Paris store. 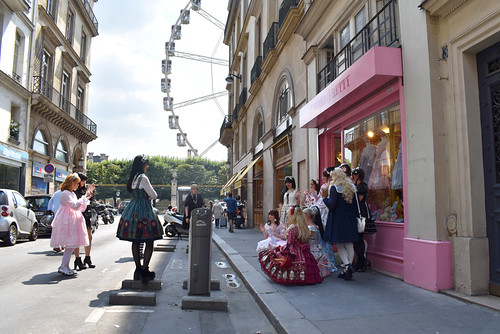 After saying goodbye, my mom and I then went on to station Opéra and to boulangerie Aki to meet my friend Emilie! She had just arrived in Paris and had asked if we wanted to have dinner together, which we did. We went on to Aki’s other restaurant a little further down the road, as I think the small one was closed? Something with a power failure? If I remember correctly…
Anyway, we picked some really nice food! 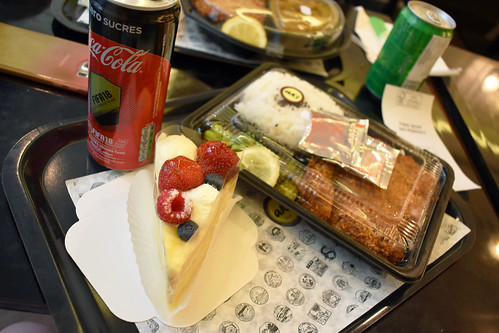 We had a lovely time just eating and chatting with the three of us. I was so happy to see Emilie again! She had even brought me gifts! She’s too kind. ;___; 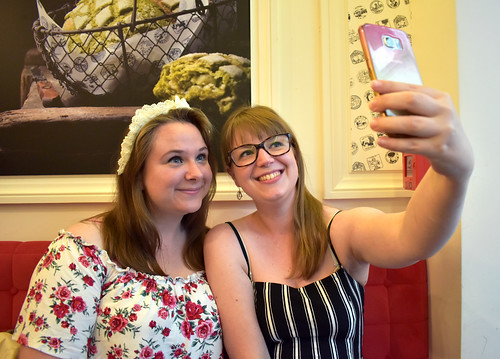 Taking selfies with my dear. ♥

After our dinner, we also got some bubble tea across the street. As Emilie is a bubble tea expert, she has to try many different ones anywhere she can to give her opinion. I believe the ones we had were acceptable. XD 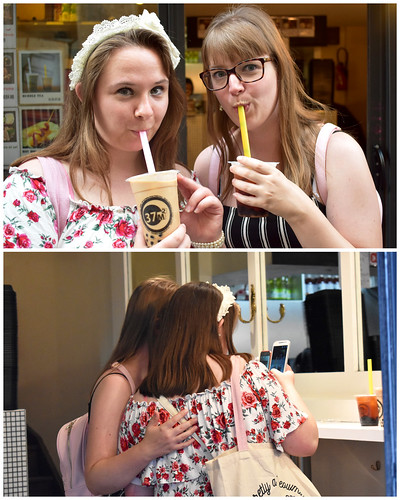 Two pictures I really like. The one from behind is so precious!

Finally we said goodbye and my mom and I returned to our hotel. I would see Emilie again the next day, at the Angelic Pretty Tea Party! So it wasn’t goodbye for long.
I prepared my things for the next day and we had a chill evening until we went to bed. 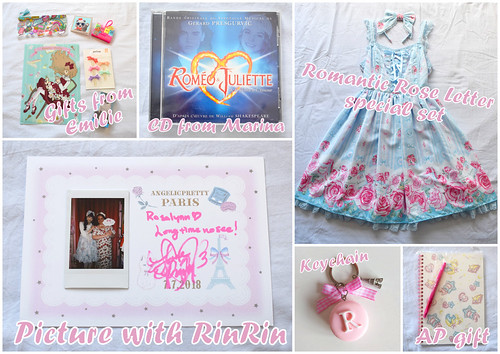 Purchases and gifts of the day