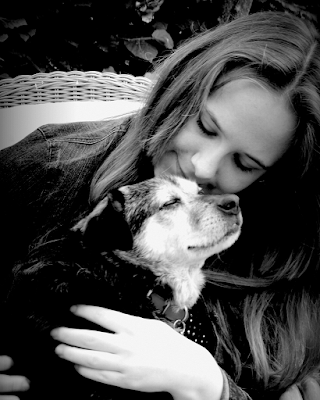 I apologize for my lack of updates. 2018 didn’t start off very positively. On January 3rd, my dog Ollie passed away. Last time one of my dogs died, which was four years ago, I wrote a blogpost here that still really touches me to this day, so I will try and recreate it for Ollie by telling you some things about him.

We adopted Ollie (official name Oliver) in 2013 through the stray dogs foundation we are a foster family for. When my mom was in Spain to help out, she fell in love with a dog named Oldi. He lived in a pen together with some other dogs and had the saddest look in his eyes. When my mom arrived back home, she just couldn’t stop talking about him and looking at pictures she took of him. Eventually, my father decided to adopt Oldi as a surprise for my mom’s birthday. She was so happy! ♥
Although he was already 10 years old, Ollie turned out to be still full of life and energy! He loved going on walks and was always so happy to be outside. We never got him to walk off leash sadly, since his mind would switch to ‘adventure mode’ and he surely would have run off. Nevertheless, he loved walks in the park and going to the beach. ♥
He was really dumb. You might think that’s not a very nice thing to say, but I mean that in the most loving way. Ollie was obviously just not very smart and this showed in various small, everyday situations. It was super cute though. ♥
He stared, very intensely. Ollie had this strange habit of staring deeply into your eyes when you pet him. Normally, when dogs do this it means they’re scared and might lash out, but Ollie never hurt a fly. I sincerely believe he just didn’t receive the dog memo on the fact that’s usually a no go. ♥
When you would stop petting him, he would break his trance and wag his tail, asking for more pets by licking your hand or pressing his head against it. It was super cute. ♥
He always howled happily when you arrived home. Sometimes this was a bit bothersome, especially when you got home quite late at night, but he was always so happy to see you. he never really barked, he just howled. ♥
He was a very vocal dog anyway. Ollie used to whimper a lot, but from happiness or excitement. It was annoying at times, but quite sweet as well and now I find myself greatly missing it. ♥
He had the tiniest white tip at the end of his tail. It was so adorable. ♥
He was our only dog that ever played with foster dogs, despite being our eldest one! ♥
He loved belly rubs. He always tried to get them while you were petting him and sometimes his huge eyes convinced me to give him one, but most of the time it just made me laugh, because he looked so funny. ♥

Ollie became very sick within an incredibly short amount of time. He was always so healthy and strong and suddenly everything went downhill within a day. The veterinarian came to our house to see if anything could be done, but there was nothing left. Ollie died while my mom and I held him.

Losing a pet is always hard, but the fact his death was so sudden makes it even more painful. We thought Ollie would outlive all our other dogs, he was so healthy! I keep seeing him in the corner of my eye, I keep thinking I hear him walking to his bed at night, I keep expecting to hear is happy howling when I come home. I hope to see him again someday.