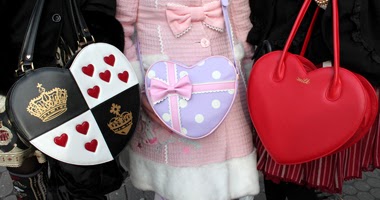 Last week, on Saturday February 15th, my parents and I went on a trip to Düsseldorf, in our neighbouring country Germany. My parents had been wanting to go on a shopping trip for a while now and when they decided to finally go, they suggested I could meet some of the German Lolitas I had met at the Kawaii Event! I immediately contacted May and soon she had set up a meeting. I was so happy!
Finally the day arrived and I woke up at 5:45 am (uuuhhhh!) to get ready. I had decided to wear Candy Treat again, combined with pink and lavender. ^^ After my parents and I got ready, we left at 8 am. The car ride was quite pleasant: we had chocolate and after a while I plugged my phone in and we had some nice music (well, at least in my opinion). ^^ I took my birthday present with me for the first time. ^^

After two hours, we arrived in Düsseldorf. We parked in the garage that May had recommended us and then we went on our way to the station.
We arrived a bit early, so we had some time to syncronize our phones and take some pictures! It was quite crowded, but no one bothered us, despite my bright pink coat. Me at Düsseldrof Hauptbahnhof. I could finally wear my Angel Pony Coat again!

Suddenly, I saw a girl dressed in pink in the distance. It was Ami, who I had met at the Kawaii Event already! Soon May and Aimee (who was new to me) joined us and I said goodbye to my parents. We first went to Burger King (huhu :3), after which we went to get Bubble Tea~! While we were walking, we already talked a lot and I immediately felt at ease with the girls. They were so sweet! ♥
The first Bubble Tea shop we went to was closed, but luckily the second one was open! ^^ Only May and I wanted some Tea, so we went inside. This Bubble Tea was probably the best I have had until now: it was strawberry, but mixed with green tea and ugh it was so good! The shop even had a little Gothic Lolita on the sign!

While drinking our Teas, I followed the girls to a Japanese book shop and my God, it was the best Japanese book shop ever! When we entered, I was just overwhelmed! It was a small shop, but all the walls were stacked with magazines and cute stationary and the ceiling was covered in anime t-shirts! One of the staff members took our Bubble Teas for safety, but it was quite convenient for May and me, since we were now able to browse more easily. I followed the girls to a corner opposite of the entrance, filled with magazines like KERA and Gothic & Lolita Bible. They had all the newest editions and for quite nice prices, something I can only dream of in my own country. Suddenly I spotted something from the corner of my eye: it was the Baby, the Stars Shine Bright stationary set I had only seen on the internet! I never expected to see such a thing in an actual European shop! The girls told me a little about the shop and that until a while ago, they even sold the Angelic Pretty mook, but it was sold out unfortunately.
We browsed through the magazines for a while and took a look at the newest KERA, which featured Angelic Pretty’s newest print: Melody Toys (although the advertisement said ‘My Secret Attic’. XD). I really like this print a lot, it’s so cute! May checking KERA, doubting about whether to get the new print or not
(the answer is probably yes! XD).

Suddenly, between some magazines, I saw it: Angelic Pretty’s mook! I couldn’t believe my eyes and must have gasped awkwardly, for I couldn’t believe it! I had wanted to buy the mook before, but didn’t get to it in the end. And now I could just touch it and buy it here and now! I doubted for a brief moment, but well, I just thought it was destiny! ^^ They also had the Innocent World mook and some wonderful Lolita sewing books with Midori and Misako on the covers as well, by the way. While I was paying, we were joined by a fifth Lolita: it was Denise, who was also new to me. We retrieved our Bubble Teas and then went on our way to the Japanese restaurant May had planned to go. There we were joined by the rest of the group (although some came a bit later).
We went inside and got to our table. The girls had told me that in this restaurant you had to order by iPad, but then the waiter told us they were broken! :( Luckily, they soon worked again, yay! Ordering by iPad, how amazing! *_*

We took a look at the menu and soon started ordering. They had so many choices! I didn’t know where to start (well, for sure I was going to order takoyaki, I was so happy to see it on the menu)! Ordering food, checking magazines while waiting and May looking cute. ^^

Finally the food arrived and it was so goooood! Especially the takoyaki and gyoza. ♥ I had also ordered some edamame beans, but there was no way I could eat them elegantly,
oops! ^^’ They were quite nice though. We stayed in the restaurant for quite a while. It was so much fun to just eat and chat with each other. ^^
Finally we paid, Denise and I quickly went to another book store and then we went to a Japanese super market, where I only bought a dorayaki (Japanese pancake).
After that, we all went to a church nearby to take outfit pictures! It was quite windy, but we succeeded. ^^ I was so happy to take pictures of all the girls, each one of them looked gorgeous! So I made them all a separate little collage. First up, the beautiful Miriam in her pink and fluffy outfit! May, our gorgeous chocolate lady! Cindy, in her wonderful deer-themed outfit! Evangeline, amazing in Little Bears Café (and her amazing hairdo)! 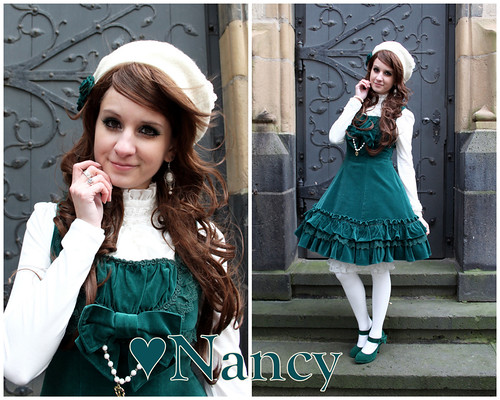 Aimee, with her gorgeous red dress and key nekclace! And I gave myself a collage as well. ^^ Some duo pictures because I thought they were just too cute! ^^

After we were done with our separate pictures, we also took two group pictures. We asked someone who passed by to take a picture of us, but he cut off our legs (like, why..? -_-“). I just cut it a bit to make it look normal again, haha! After we were done taking pictures, we crossed the street for some girls to visit the bakery there. I was still so full from the restaurant, that I didn’t want anything. ^^ Since it was almost time for me to go back to the station, we said goodbye to some of the girls who continued shopping. Then we quickly went to the Japanese book store again, where I bought the newest KERA after all. ^^ We then went on our way to the station, while talking about everything and nothing. It was so nice! :)
We arrived at the station, where my parents were already waiting for me. We all talked a bit for a little while and took some last pictures. Denise, May and Aimee looked so cute in their capelets, I want one too now!

Finally, it was time to say goodbye. I was a little sad: I had made good friends in only one day and I already had to leave them! I really hope I will see them again soon! ^^
My parents and I returned to the car and drove home. I was really tired, but couldn’t sleep at all. It had been such a fun and exciting day! Thank you again to the German Lolitas for meeting me, it was a-we-some! ♥ And finally, the shopping haul of the day!