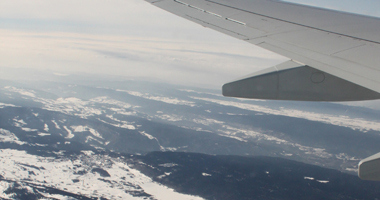 On Friday morning we woke up and had breakfast (I was really going to miss Emilie’s delicious Kellog’s Trésor chocolate thingies, haha). Then we got dressed and I put the last things in my suitcase, when suddenly Emilie’s mom walked in and gave me a huge box of chocolate’s for back home! Too sweet! ♥
After that, I browsed a bit in Emilie’s wonderful Hobbit artbooks. She also showed me bits of the Lord of the Rings movies in French. It was so strange for me to hear different voices for all the characters!
Then it was time to leave. We put on our coats and I said goodbye to Emilie’s wonderful appartement (XD). We took the elevator downstairs and walked for a while, just talking about all kinds of things. Finally, we arrived at the bus station, where the bus to the airport was already waiting for us! We sat down and not long after, the bus departed. The view in the bus. XD I love buses.

The busride was really nice, because it drove all around Geneva and then up to the airport. I really like to have like a last view on the place I visited and buses are perfect for that! And I had a nice chat with Emilie about school and the city. ^^
We arrived at the airport, where we had to wait for a while until I could check in my luggage. Finally the desk opened and I let my suitcase go.
We decided to have some lunch and we ended up at Burger King, where I only got a hot brownie (or as I call it: ‘a brownie thing’) with ice cream. ♥ Since I couldn’t take my delicious peach drink from the Japanese supermarket with me, I drank that as well. Finally, Emilie’s mom joined us too. She had to go somewhere that morning, but wanted to say goodbye one last time so she had come to the airport. So sweet!
After our lunch, it was time to say goodbye. I thanked Emilie and her mom for the three (and a half) wonderful days and then it was time to stand in line for the check in. After one final last wave goodbye Emilie and her mom left and I felt a bit sad. I was all alone again. I didn’t have much time to feel sad though, since I started to worry a bit about the time! The line was moving so slowly, I was afraid I would somehow miss my flight! My worries were for nothing though and I finally passed customs.
I quickly went to the toilet (where it was super quiet, until I almost ran into a cleaning lady) and then to my gate, where people were just waiting to board. Me and my worries! XD
I went to stand in front of the desk for passport check and after some waiting, I was allowed to pass the desk as one of the first people! I followed the tunnel up to the plane. The plane, waiting to take me home.

I quickly found my seat at a window and just waited. Many people came after me (of course), but also a lot of children! :/ There were two kids accompanied by their grandparents who were so annoying, ugh. Oh well.
After a while, a woman asked me if I perhaps wanted to switch with her friend so they could sit together, but her friend had a middle seat and I really prefer the window, so I said politely declined (I felt a bit bad. But then again, I had a window seat!).
After a while, the plane started moving and took off, leaving Geneva behind. After a short while, stewardesses walked by to hand out food and drinks. I chose a waffle and coke again. ^^
I read the Holland Herald (new issue, yay! It had a superinteresting article about famous books, so nice) and looked out of the window a lot. Despite the many children, I didn’t really hear them that much. There was an old woman who got really sick during the flight though. Poor woman… We also had a bit of turbulence (you usually have that, but it was more than I am used to), so I was happy when we finally started to descend again.
The plane hit the ground and not long after we could leave our seats. I followed the crowd and quickly found the signs guiding me to the luggage belts. I could already see my dad waving at me from behind the windows (I was a bit surprised to see him as it was a working day), but not my mom. I went to the right luggage belt and waited for my suitcase to come, which didn’t take long. I walked through the doors into the airport, where both my mom and dad were waiting for me. My mom was holding a heart-shaped balloon! She is so crazy. ♥ I got to hug both my parents and my dad drove us home, where I could hug my dogs again too. It was strange to go on Facebook and tell Emilie I had arrived home safely, while we had seen each other only a couple of hours before! Suddenly we were so far away from each other again… I did like to be home again though. I really had the most wonderful time in Geneva and I really hope to go back there someday again!

Thank you for reading my Geneva reports. I hope you enjoyed them. ^^