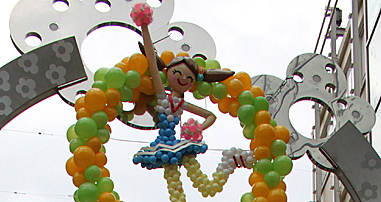 On Tuesday morning, we slept a bit longer. Our Disney adventure had taken a lot of our energy, so we deserved to sleep a bit longer. We got dressed and went to have breakfast.
We had decided to make this day our ‘shopping day’. We had checked online what kind of weather it would be in the days after Disney. Tuesday would be a grey, bit rainy day and Wednesday would be clear and sunny. We wanted to return to the Skytree, so we wanted nice weather for that, making the choice of day easy.
My mom and I had noted the places we wanted to return to to do some last shopping, which were MyLord in Shinjuku, Harajuku and MaruiOne in Shinjuku. We decided to start at MyLord. My mom and dad ready for our shopping day.

We calmly browsed the stores of MyLord a bit. I really wish we had a mall like this near where I live. ^^ My mom spent some time in the Home&Kitchen store. She bought some adorable small bowls and drink coasters in the shape of biscuits. We both also spent quite some time at the DIY shop, where my mom bought supplies and beads to make necklaces and I bought a lot of supplies to deco things! The Home&Kitchen store, in Halloween style.

We passed a store where they had beautiful tulle skirts on display and I tried on a Bordeaux red one. The shop girls were super sweet and enthusiastic (as usual ♥) and my mom decided to buy it for us both. We also browsed my mom’s favourite shop: Casita (Retro Girl), where she bought another soft scarf for a friend. I bought three gold glittery hair accessories in the shape of a star, bow and a ballerina. They also had adorable hats with little ears on them. I kind of regret not buying one…
As it was past 12 pm already, we had gotten a little hungry. We decided to have some crêpes at Café Est! Est! The way too many amazing choices at Café Est! Est! *_*

My parents both chose a crêpe with tiramisu, I chose one with whipped cream and banana. The crêpes were very delicious and made a wonderful lunch! ^^
We went on our way again to Shinjuku station, where we took the Yamanote line to Harajuku.
When we arrived at Harajuku, the sky was quite grey but there was no rain (lucky us). We followed the road to Takeshita dori, which was a lot less crowded than Sunday! ^^ We entered the shopping street and suddenly, while looking down a hall with stairs I remembered we hadn’t done any purikura yet! My mom really wanted to do it, but my dad passed to get some coffee at the McDonald’s across the street.
When my mom and I got downstairs, our eyes had to get used to all the colourful booths! I quickly fund a purikura machine I wanted to enter: Kyary’s Puri-ma-donna (that name is just genius)! It was a bit complicated to explain to my mom what to do while simultaneously keeping an eye on the time and where to put my stuff, but we managed! We took some nice pictures and then went to the other side to decorate them! It was so much fun! My mom got a bit over-enthusiastic and covered me completely in bows on one of the pictures, but we couldn’t find the eraser! Luckily, two English-speaking girls were doing purikura in the next booth and they were able to show me! ^^ I looove purikura! We should have done it more! Shame the pictures don’t come out as big as they are on the screen.

Because there were no other people using our booth, we had plenty of time to decorate. The result was really cool (even though my mom was a bit disappointed by the size of the pictures when they came out. XD)!
We took our pictures with us up the stairs and joined my dad, who had just finished his coffee. We continued our way and entered the Paris Kids, where I bought some really cute accessories including two pairs of the cute cherry pins I had seen floating around the internet. We walked on and entered Bodyline, also significantly more quiet than Sunday. ^^’ I spent some time picking another pair of shoes (I decided on another pair of the ballerina-like shoes, but in red) and I also picked out a nice lavender blouse. My mom discovered a very sweet yellow and pink cutsew that I also bought. When I arrived at the checkout, I experienced one of the many amazing Japanese services when it comes to shopping. The sweet shop girl showed me the size of the shoes and both the blouses, so I could check if I really had the right ones. Suddenly she pointed out that the lavender blouse was missing a pearl. She immediately went to check whether they had any blouses left that had all the pearls, but unfortunately there was only one blouse left with a flaw. So she carefully cut of one of the pearls of the other blouse and put it in a little bag so I could sew it on myself if I wanted to. I thought that was very thoughtful! With my Bodyline purchases! ^^

We left Bodyline again and I jumped into Closet Child (this time I really promised not to try on anything). I picked out some adorable Chocomint and Angelic Pretty accessories, but I should have checked them better. One of the Chocomint hairclips has a missing clip. -_- Oh well. A picture I took in Closet Child! All the pretty dresses…

We walked on towards the end of Takeshita dori, when I suddenly noticed a shop to my right where they had lace collars hanging! My mom had been looking for them all week, but just couldn’t find them and now I saw a whole bunch of them! She was so happy, she bought two beautiful lace collars! ^^
We left Takeshita dori and walked into Meiji dori, where we walked on to Laforet. We went down to the Lolita floor and I looked around for a bit at Angelic Pretty, but I ended up buying nothing. We walked on an passed Nile Perch, the amazing pastelly and cute shop with very high prices unfortunately. A little look into Nile Perch. Sorry for ruining it with my arm. -_-

We walked on again and I went on a shopping spree at Swimmer, where I bought two pairs of socks, a folder with macarons on it, a lunch box and many, many cute accessories. It was so sweet, my dad helped looked around with me and pointed out the cutest things! I received them all in an adorable bag and I even got some Halloween cookies from the shop girl! ^^ My dad helping me pick out cute stuff! This is my ‘Everything’s so adorable’-face. My mom wanted a picture of her holding all the (or rather, my) shopping bags. ^^

Back at the hotel we rested for a bit until we were reenergized.
Around 5:30 pm we left the hotel again to go get dinner. We looked around the restaurants at MyLord for a bit (again) and decided to go eat sushi! I mean, you have to eat sushi at least once when you’re in Japan right? We entered a sober but cute restaurant, where we were seated at the bar and where the chef made the sushi right in front of us! It was a lot of fun to look at! We had all chosen the same plate, a selection of different kinds of sushi. Mom posing with her sushi because it’s awesome!

The sushi was absolutely delicious and it probably tasted even better because of the atmosphere. Ugh it was so good! ♥
After we finished our dinner, we decided to split up for a while. My dad went to browse around in Tokyu Hands, while my mom and I went shopping at MaruiOne, aka Lolita Heaven!
As usual, Shinjuku looked amazing at night. We passed a cute, old fashioned stall and also a little pink van that sold crêpes. I’ve seen pictures of it on the internet after I got back! After a little while we arrived at MaruiOne. My mom and I entered the shopping center, where I told her bits and things about the different shops. I showed her MILK, which is such a cute shop, and also La Pafait and Jesus Diamante. At La Pafait, the shop girl looked amazing and she was very kind, but at Jesus Diamante they looked suspicious at us, haha! XD
We went up to the seventh floor and browsed Baby, the Stars Shine Bright a bit. Their new print, Ice Queen or something, had just come out and the ice blue version was absolutely to die for! I received a piece of paper showing the new upcoming print (the one with the fairies and the music stuff) from one of the shop girls. ^^ A part of the beautiful Baby, the Stars Shine Bright shop at MaruiOne.

Then we entered Angelic Pretty, where I browsed around for a while. They had nice things, but not really stuff I desperately wanted. I did discover a super cute black cutsew one piece dress, but I wasn’t allowed to try it on (probably because it could stretch or something). It was a shame, because I really liked it, but I didn’t want to buy something that might look not good after all. I browsed the umbrellas for a bit and found a beautiful white umbrella with pink bows along the border. My mom and I loved it immediately and I decided to buy it! Me with my purchase. I’m disappearing into the pink! On one of the floors I bought a cute box that looked like a book from the outside and my mom and I took an ‘obligatory’ MaruiOne mirror picture. ^^ Lots of Lolitas visiting MaruiOne take a picture in a mirror, so we did too!

We left MaruiOne again and walked through the enlightened streets of Shinjuku. Suddenly I saw an arcade and I hoped they would have purikura, which was the case! After exchanging some money with a funny machine, my mom chose the pink and green booth Bambi-na to take pictures in! We took some really nice ones and decorating was a lot of fun again! When we were done, we could also choose an option to receive a present. How nice! My mom waiting for our pictures next to the cute purikura booth.

We received our pictures and present (a little box of pink cotton swabs) and then left the loud arcade again. ^^
We went back to our hotel, where we joined my dad. Instead of buying something for himself he had bought me a pair of cute purple head phones! ♥ They are so nice and comfortable.
We discussed the plans for the next day a bit, Skyped, uploaded pictures and I took some pictures of my purchases. Then we finally went to sleep.