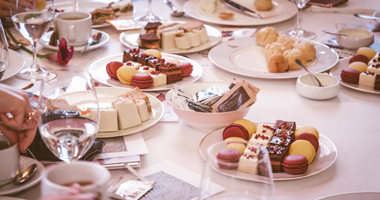 On Sunday March 19 the Tea Party took place. Where I didn’t have to do much for my Saturday look, my Sunday outfit was a bit more elaborate, so I got up early. Together with Josine and Isa I stationed myself in front of the broad mirror (very handy) and together we did our make up, which was actually quite fun! ^^ The girls also helped me with my hair, because I tried to do a repeat of my Angelic Pretty queen hairstyle which needs… some assistance, since otherwise I would get a crown irrevocably stuck in my hair. x)
I had decided to wear my Atelier Pierrot dress that I had bought at (or rather, after) Under the Sea. I had worn it once before for a singing performance and it’s quite comfortable, not to mention very pretty. Also, the designer would be at the Tea Party so hey, that’s nice too!
After we got dressed, we left the apartment and walked to the Tea Party venue, which wasn’t very far away. It was quite a refreshing walk; it was a beautiful day out and not too hot yet.
We walked past the Saturday venue and arrived at the Tea Party venue, which was located right beside it. Some people were already waiting (early!) and we chatted a bit with them. Josine (who looked absolutely stunning as usual, no words) and I took some outfit pictures and I also took a picture with dear Andrea, whom I was so happy to meet! ♥ 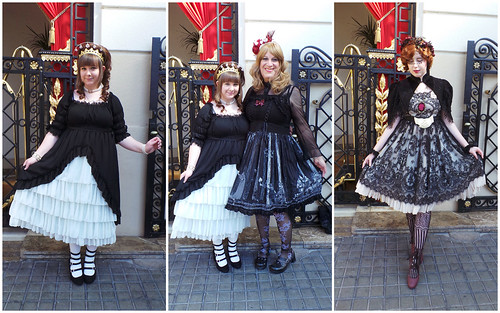 My outfit, posing with Andrea, and Josine’s outfit.

We were initially sent away by the slightly rude hotel staff, because we weren’t allowed to take pictures of the door(?). That was interesting. Josine, Isa and I went in anyway, because we were paying to organize a Tea Party there and stuff. (Sorry, I’m feeling slightly… sassy writing today). Once we entered the Tea Party room I have to admit my breath was taken away for a moment. The room was simply stunning. The room was filled with round tables with long, white cloths on them, matching chairs surrounding them. The soft carpet had the most beautiful design. The ceiling was painted blue with white clouds, gorgeous chandeliers hanging down from it. The walls all had that Ladurée mint colour and were covered in gold finery. On opposite sides were giant mirrors, one of them mostly covered by a huge painting of a flower vase. It was just amazing! 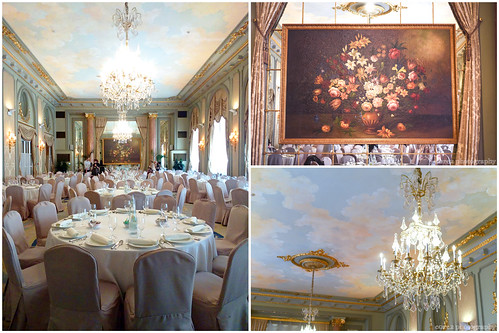 The beautiful room the Tea Party took place in.
Pictures on the right by C0re2 Photography.

Soon the rest of the staff arrived as well and we prepared the tables for the guests. I helped putting down postcards and fake tattoo sheets. The work was done pretty fast actually. 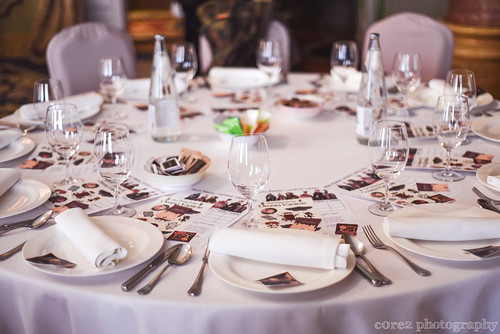 Gifts for the Tea Party guests.
Picture by C0re2 Photography.

Since we were done pretty fast, our photographers were kind enough to take pictures of us before we would all look like sweaty messes. Thank you so much to these great people~! So here is my outfit, I hope you like it. ♥ 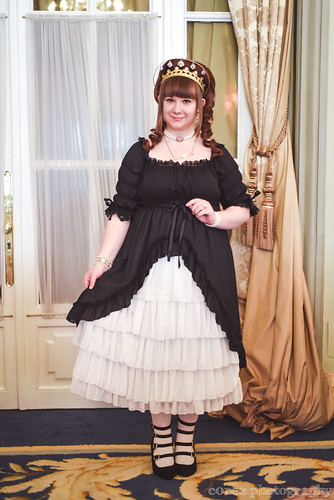 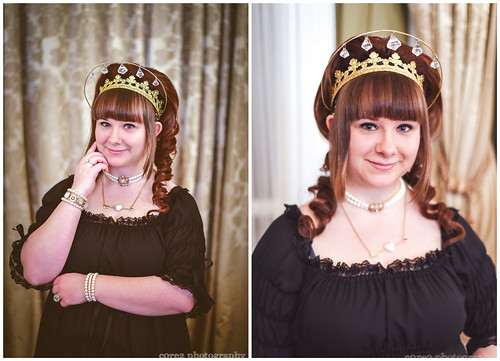 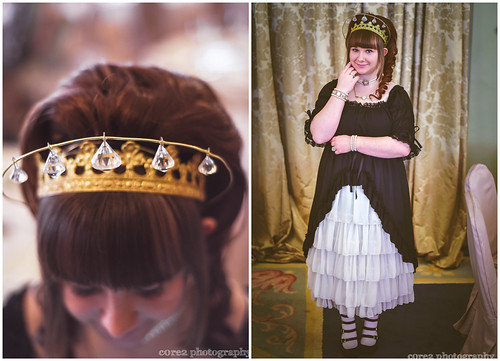 Before we knew it our special guests arrived and it was time for the Tea Party to open! All the organisers picked their seats by putting their bags there. I was one of three who ended up at the registering desk, which was actually quite nice, because I got to greet a lot of people! ^^
Sooner than expected everyone was already in the food and drinks were being served. The Tea Party had started! 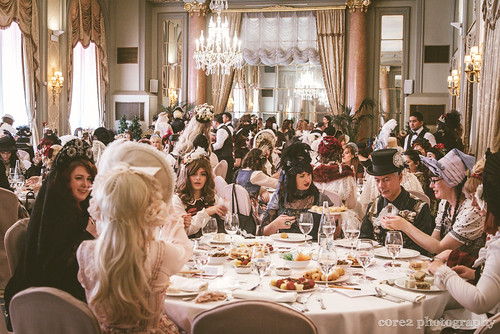 People enjoying the food and conversations.
Picture by C0re2 Photography.

Josine, Isa and I had chosen a table a little to the side. For some reason people didn’t really dare to take that table, so we ended up having some spare seats. Later this came in handy, because one or two girls arrived late. Also, more food per person! Which was absolutely great because the food was so great! There were amazing sandwiches and macarons and pastries, I loved them all! Except there was one vegetarian or vegan sandwich that was going around the table because everyone hated it. I tried it too, it was so gross! XD We had quite a laugh about it. But the rest was amazing! ♥ 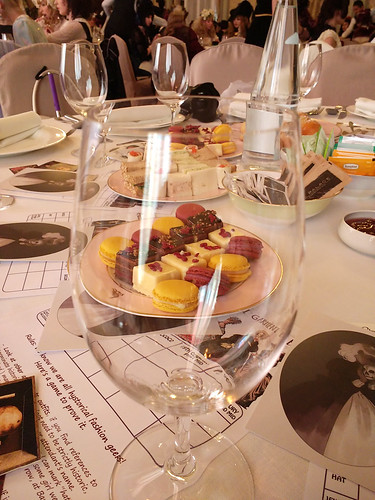 Can we take a moment to appreciate this incredibly artsy picture I took of the food?
I’m quite proud of it. ♥

Everyone had done their utmost best to look their most beautiful. I’ve seen so many amazing outfits! And the details, oh my God. While browsing through the photographer’s pictures to pick some for this blogpost I kept seeing details that made me think ‘Did I even see that!?’ It’s amazing! 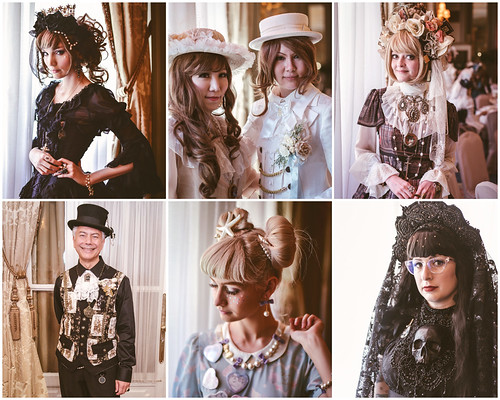 Some of our beautiful guests and staff members. ♥
Pictures by C0re2 Photography.

Also some people wore headdresses that were absolutely deadly. How did they even keep them balanced on their head? So amazing! 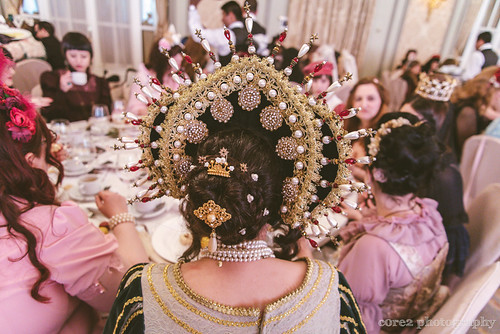 This headdress is just magical! ♥
Picture by C0re2 Photography.

Tea Parties are always much more relaxed for staff as well. I got to take some pictures with the special guests even! Aya Nimura was so kind and she looked so lovely! And when I showed Ayumi I was wearing a RoseMarie Seoir necklace, she was very happy and told me it was sold out in Japan (lucky me, I love that necklace). Yuko was happy to see me wear a dress she designed. I felt quite proud. ^^ Also, Imai Kira was taking pictures with people! She hid her face behind a plush bunny, so people hid their face too. It was amazing! 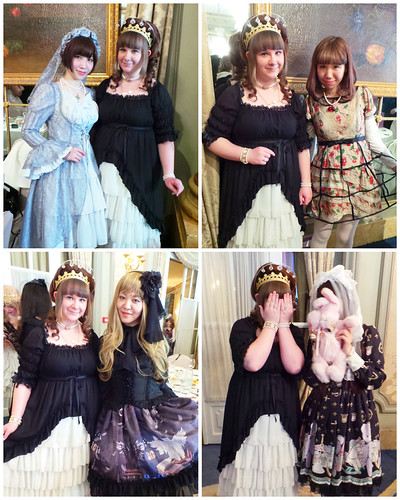 Since so many people looked so gorgeous, have another collage. I swear I wish I could include everyone! 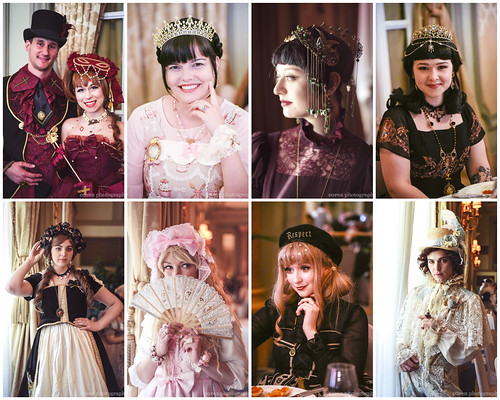 Some more of our beautiful guests. ♥
Pictures by C0re2 Photography.

Eventually, it was time for the raffle! Unfortunately, something went a bit wrong here, since we had forgotten or lost the raffle numbers! So we ended up using a random number generator, but sadly these generators go back to the same numbers eventually. It ended up being a long raffle. x) Sorry everyone! 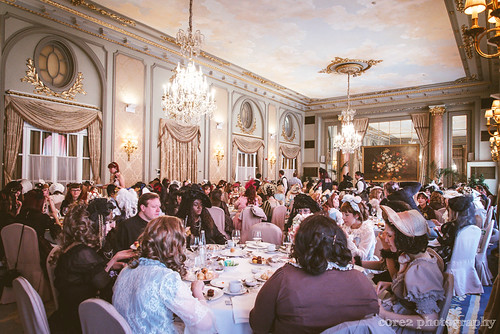 The room seen from the other side.
Picture by C0re2 Photography.

Then it was time for the special guests to pick their favourite outfits! This is always so much fun! And what great winners they chose. Imai Kira ended up choosing my friend Charlie as her favourite, Ayumi picked dear Camélia, Yuko chose Jo, Leur Getter chose Fanu and Aya Nimura picked someone from the head table with the best and biggest hat I’ve ever seen! Amazing winners~! ♥
The Tea Party was starting to come to an end, so I was happy I quickly managed to snap some pictures with people, like Arthael and her amazing group and the Leur Getter designers. 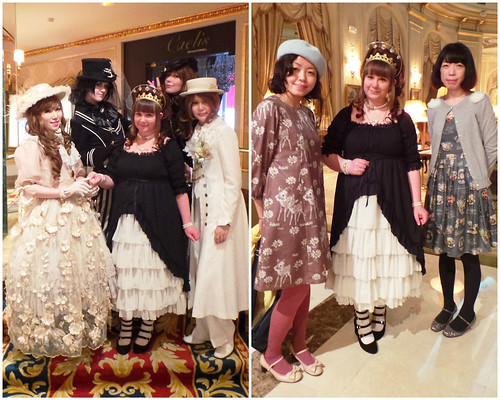 So happy with these pictures!

After everyone had gone, we took a taxi back to the apartment (we were tired ok). There, we got redressed into our after party clothing! I have never gone to an event after party, so I was sort of excited for this. However, Josine and I needed to get up really early the next morning, so we couldn’t stay for too long. However, the night turned out… interesting. Brace yourselves.
We got into another taxi and headed for a restaurant. Ah no, I thought we were going to a restaurant, but instead we headed for the Fairytale Café with some American girls.
Can I just say... Best. café. ever. Hashtag aesthetics much! This café is just… I can’t even describe it, it’s amazing! It has several areas, among which a big room that looks like a freaking forest and another room (the one we got seated) had a flippin’ giant swing. Yes, you read that right. Sorry, I didn’t take any pictures. Look it up though. Do it, now.
We had some food and chatted for a bit. I breathed down a new panic attack (heyo!) and suddenly, I heard Isa shouting at a guy standing close to us. Apparently the guy had stalked us into the café and just kept staring at us like a zombie. It was the freaking weirdest thing! Eventually he left, but it was… something. Ok, so that was part one of the evening, now onto the next.
We went on to the after party location, which was some café-ish place in a backstreet of Barcelona. It was small and incredibly crowded. It was supposed to be private to us, but somehow it wasn’t and some locals were hanging out as well. Josine and I found our Dutch friends, who were incredibly kind and got us drinks. I don’t use the verb ‘to bless’ a lot, but bless them. We had fun talking, but the dance floor was nearly impossible to be on. Eventually we dared to jump around a little and I kind of lost them, but I ended up hanging out with French friends instead. I got a bit hot, so I went outside and got reunited with my Dutch friends who were just hanging out against the opposite wall. We were just talking when suddenly a big splash of water was dropped down on me! Yes! REALLY! I was soaking wet, ladies and gentlemen! Apparently, one of the upstairs neighbours had complained several times about the noise and thought it would help to drop a bucket of water on the noisy people downstairs. Which naturally did nothing for the peace and quiet as we all screamed in surprise. I thought it was rather funny, until I heard someone say: ‘He actually threatened to use acid, I’m glad it’s just water’. At that point I was done.
It was getting late and Josine and I managed to gather Isa and Josh, but first the guests needed a taxi to take them back to their hotel. It took a while, but eventually we were on our way back to our apartment, where Josine and I packed our things and eventually went to sleep somewhere after 2 am. It had been quite an eventful day.