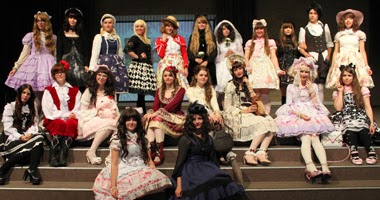 On Saturday the 30th of August, my mom and I woke up very early to drive all the way to Abunai, one of the Netherlands’ biggest anime and manga conventions. I’ve wanted to go there for quite a long time, but this time I had a very good reason: my friend Cat organised a Lolita fashion show and I was representing the Sweet Lolita style! My mom came along as photographer for the day, so we had a fun ride to the convention, where we met up with the rest of the group.
For this occasion, I wanted to wear a dress that really represents the Sweet Lolita style to me: Wonder Cookie. I had never worn it before, so this was the perfect occasion! I will first show you my outfit (these pictures were taken after the fashion show actually, but never mind that), then I will tell you a bit about the fashion show itself. 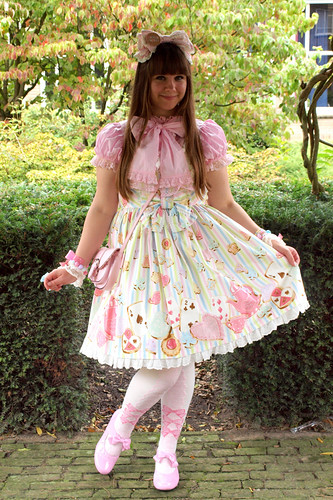 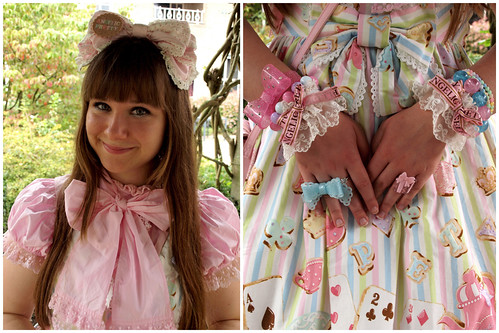 What do you think? Did I represent Sweet Lolita well? ^^
The fashion show consisted of quite a big group of people: nineteen girls and one guy would walk either alone or in duos, representing different styles. Some also wore clothes from Cat’s mom’s brand: Christeline. The show would take place at 10.30 am, half an hour after the convention would officially open, but luckily we were allowed inside earlier to get redressed and practise. Two weeks before we had practised as well, but we needed to make some changes in our walking route since the stage was quite big and had some stairs
as well.
The stage and lighting weren’t very special, but luckily there was a big screen where pictures could be projected on, which made for a nice background.
After our practise round, Cat gave us some last advice and it was time to hide next to the stage while the doors were opened. To our great surprise, nearly every seat got filled! Our show was so early we thought not that many people were able to come (or would be interested at all), but it was quite the contrary! 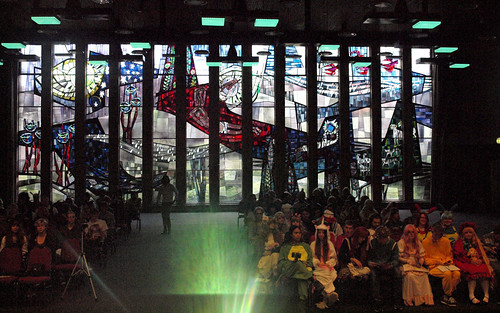 Full room! We were happily surprised.

Cat came back to wish everyone good luck. Wigs were put on, accessories were adjusted and last minute dress fixes were done. Then, Cat walked up the stage and welcomed the audience. 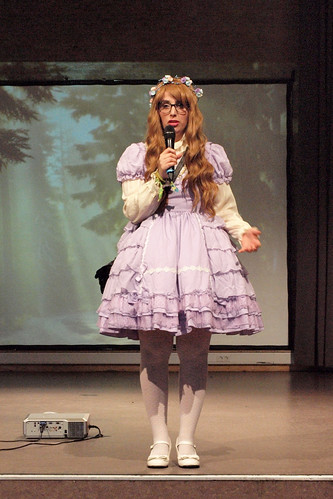 The music started and it was show time! For every group of styles, Cat had selected fitting music. She had also recorded herself as a voice over, to explain every style briefly. So the show was not only fun, but also informative for the audience! I especially loved the music for the Classic Lolitas, since they walked on ‘Fairy Dance’ from Peter Pan (2003), one of my favourite movies.
My mom took many pictures of everyone, so I will show you my favourite per person
or style. ^^ 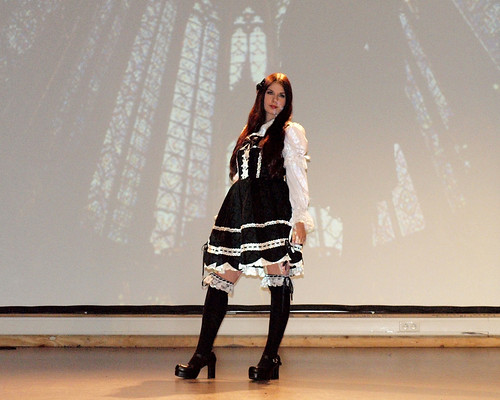 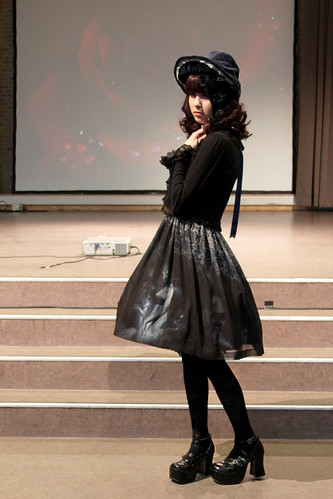 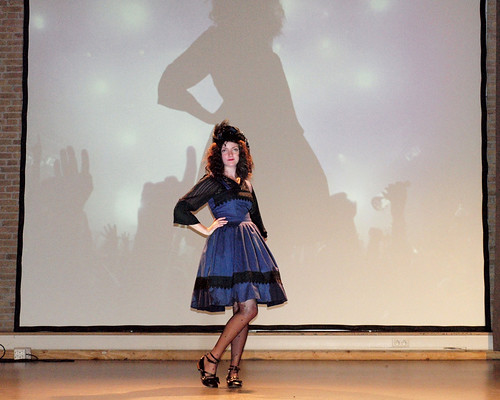 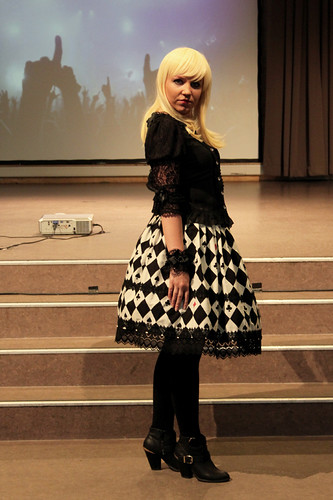 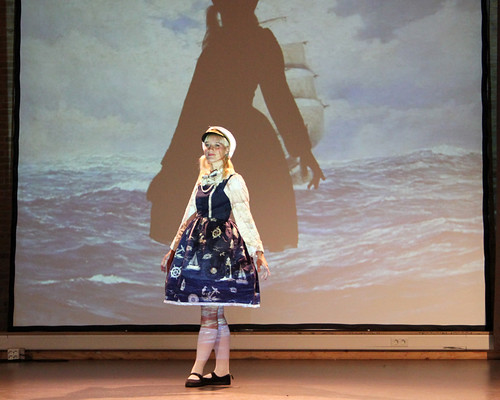 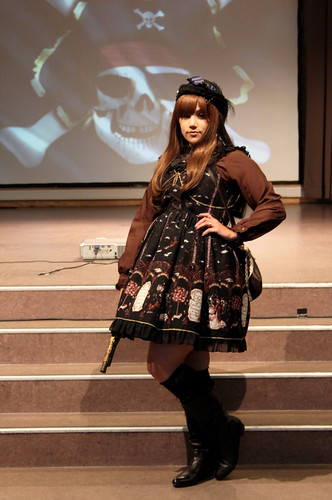 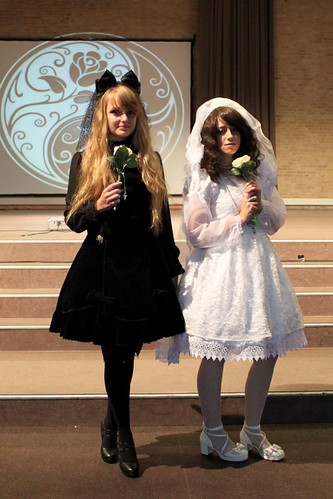 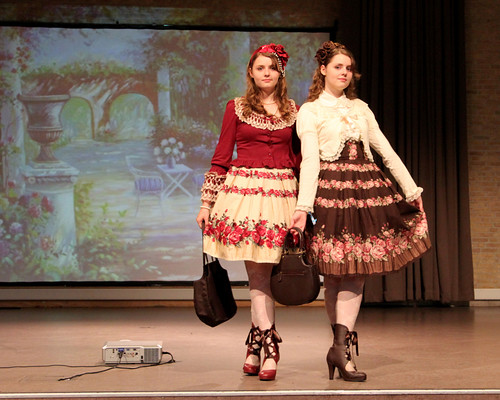 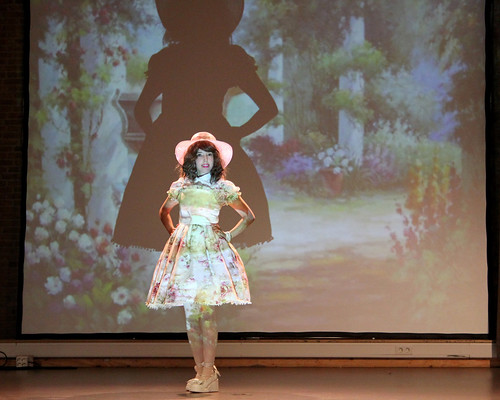 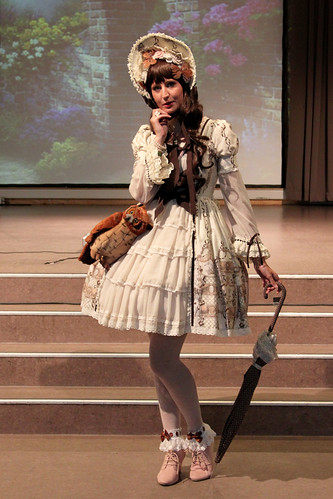 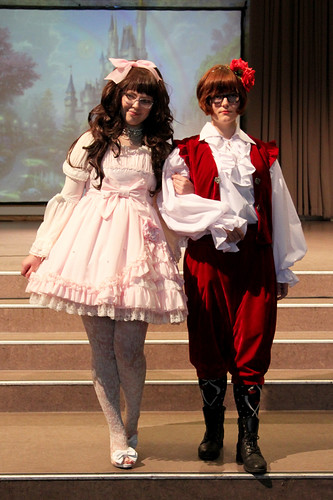 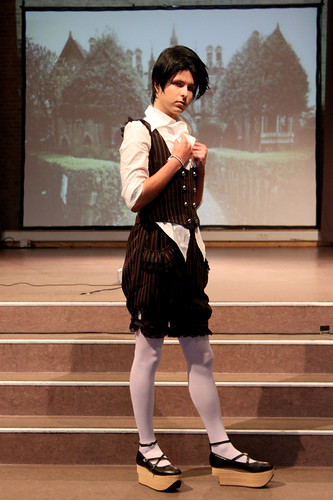 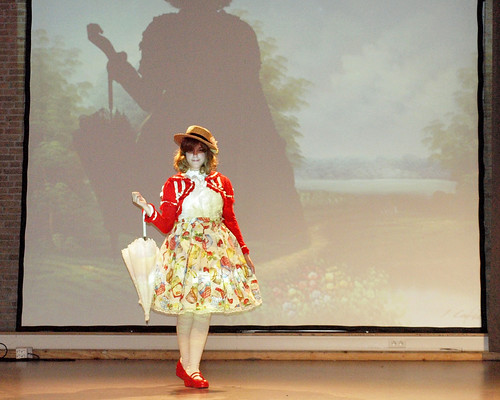 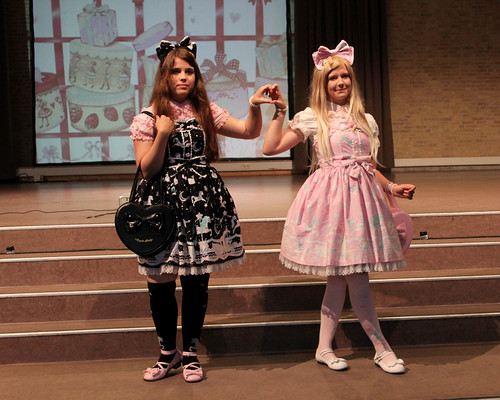 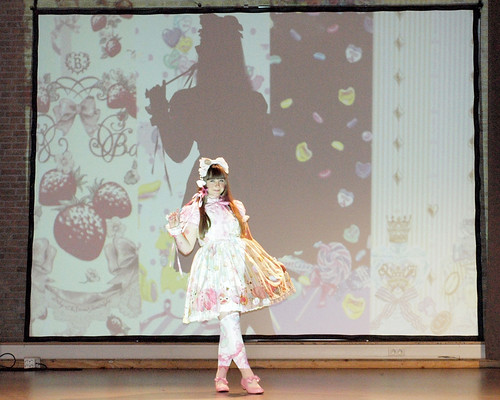 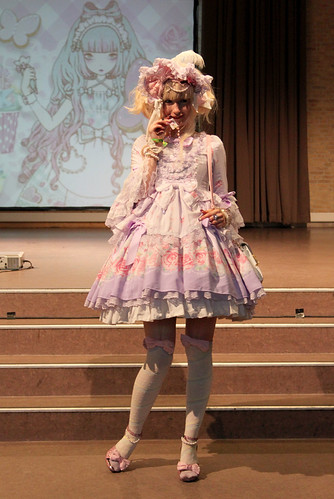 Everyone did really great! No one fell and everyone looked wonderful! I was quite nervous myself, but managed to stay somewhat graceful I think. Next time I should practise some more poses though. ^^’
After the show we had the big finale, where we all walked off the stage and into the room, making one big round while the audience applauded. It was quite empowering, hihi. ^^ We also took a group picture of course. 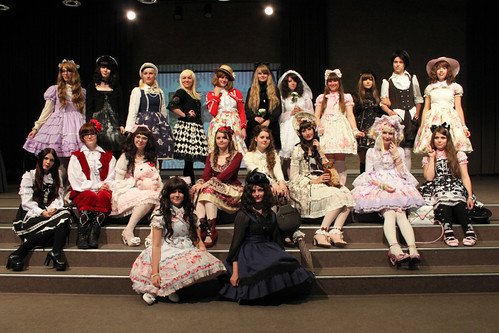 The show was a big success! There were multiple fellow Lolitas and friends in the audience and I was very happy to see them! They told me they enjoyed the show as well, yay. ^^ 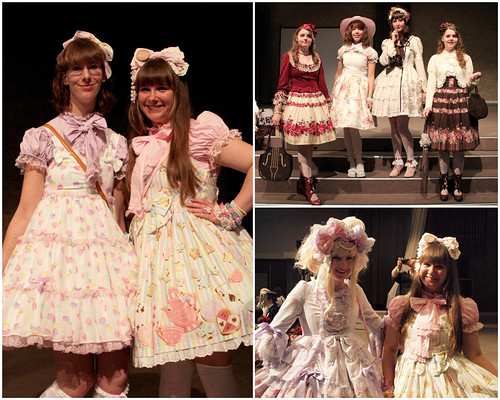 With Eveline, our Classic Lolita girls and with Iris. ♥

Now that we were all done, it was time to enjoy the convention! I was very curious to see what Abunai was like and of course I wanted to have a good look at the dealer room. One of my friends told me Tofu Cute from the UK was present and that they had brought some items from their second brand, Dreamy Bows. When I heard that, I almost jumped in the air with happiness! Dreamy Bows, as you might know, is a store that sells Japanese fashion and accessories. I was so happy to hear that, my mom and I went to check out the dealer room right away!
I have only been to two conventions in my country before, but they were both smaller than this one. Nevertheless, Abunai wasn’t as huge as I expected, but I loved the dealer room. So much stuff! *_* It was my mom’s very first convention, so she asked me some questions and was amazed by some of the cosplayers. It was quite fun to share this experience with her. ^^ 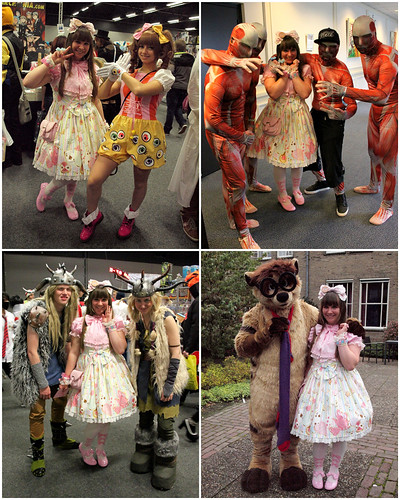 Clockwise: with a Kyary cosplayer, a bunch of badass Titans, some kind of cute animal guy and How to train your Dragon’s Ruffnut and Tuffnut! *o*

When we arrived at the Tofu Cute booth, I was so happy! They had a rack with amazing Lolita-like accessories, a rack with adorable key chains and phone hangers, lots of Japanese snacks and drinks, loads of Alpacas and the cutest bags! The whole booth just had a ‘kawaii’ atmosphere! The shop girls looked incredibly cute and colourful and they were incredibly kind as well. It made me so happy! *o* 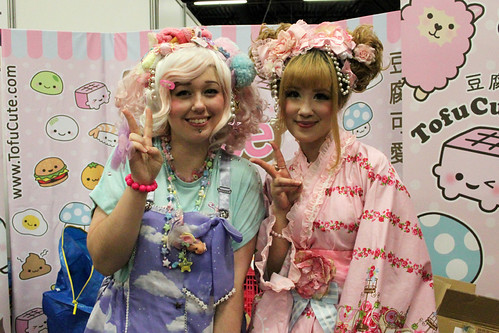 The super cute girls at the Tofu Cute/Dreamy Bows booth!

The girl wearing the pink outfit had such an amazing hairdo, she really inspired me! I ended up buying one of the hair pieces she was wearing. I had wanted a big pink flowery head piece for a long time, so this was the perfect opportunity! I also bought two buttons. I love buttons and they were just too cute. ^^ I fell in love with an amazing envelope-shaped bag as well, but since I didn’t have enough money with me I had to think about it (and get money in case I decided to get it). 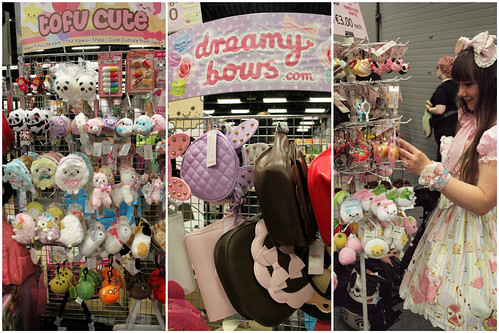 They really had the cutest items at the Tofu Cute/Dreamy Bows booth! ♥

My mom and I walked through the entire dealer room. I passed by Katie’s Summer Tales Boutique booth (where Katie so kindly offered me to exchange money, yay!), many stalls with mangas, loads of figurines, dolls and even replicas of Angelic Pretty bags! O_O That was quite strange…
After I compared prices, I finally bought the last two missing volumes of my Fullmetal Alchemist manga collection. I finally have them all now! ;_; 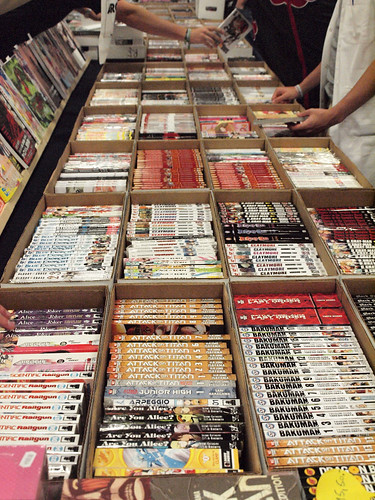 My mom and I decided to walk around the convention for a bit as well, so we walked past the game room, many rooms with panels, the butler/maid café (where I said hi to some Lolita friends) and so on. There was a really sweet girl who asked me for a picture, because she loves Lolita so much. I gave her my blog link, I wonder whether she has
found it..?
I have to be honest: the convention disappointed me a little. I was expecting something grander maybe? But nevertheless the fashion show and dealer room were really great, so that totally made up for it. ^^
I got really tired after a while, so we decided to buy the last things I wanted and then head home, so we went back to the Tofu Cute/Dreamy Bows booth and I bought the envelope bag and three adorable phone hangers, plus an alpaca tote bag and Oreo-shaped mirror for my mom. After that, we went home. It had been a very exciting day! :3 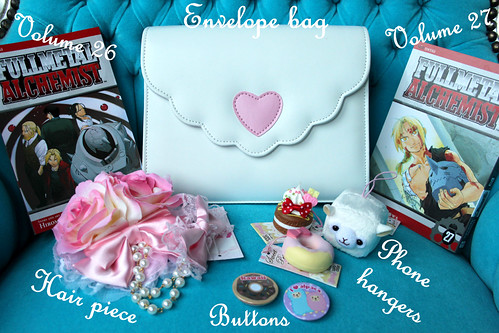