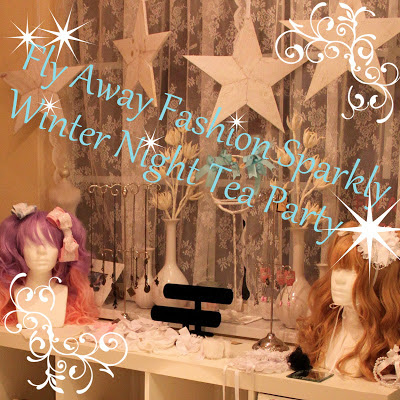 A little break between my Tokyo posts. I am totally ruining my outfit order, but oh well. -_-
Last Sunday, on November 25th, I went to the Winter/Christmas Tea Party organized by the Dutch indie Lolita brand Fly Away Fashion! This brand holds a special place in my heart, because a couple of years ago I bought my first Lolita-related accessory, a black and white headdress, from this brand (although I shamefully have to admit that I have no idea where it is right now).
My friend Cat had told me about FAF’s half-yearly Tea Parties and it didn’t take me long to decide to join her for the first time. We also both managed to join in the outfit contest, being two of the fives contestants.
Usually I have my outfit for an event ready in my head for weeks, but now it took me a while. The theme of the party was Christmas, winter and glitter. As I don’t have any dresses that represent either Christmas or winter, I decided to fully concentrate on the glitter part (which I didn’t mind at all ^^). In the end I decided to wear Fantasic Dolly in a combination of pink, mint and black with a white blouse. And of course lots of glitter! I had come up with an idea for my hair that I really liked, so I decided to wear my hair in an updo for the first time. I also wore my adorable Disney macaron necklace bought in Tokyo Disney. I love it so much! The Tea Party took place in a little party hall/parlor above the FAF-store in Houten, not too far away from the place I live. Initially, Cat and I were supposed to travel by train together, but as my parents were going somewhere that day too, they offered to drive us. We would return by train, but it turned out to be a really stormy day!
So in the end my parents picked us up too. ♥
On Sunday morning my mom helped me with my hair, I got dressed, got my things and was perfectly on time for once (I am terrible at calculating how much time I need for Lolita). We got in the car and drove to the place where we would pick up Cat. We had to wait for a while, because Cat’s bus was late. -_-
Then I finally saw a wintery girl with black hair dressed in a blue coat, yay! Cat got in the car too and we drove to Houten. My parents dropped us off and we walked up to the building, partially being blown away by the wind. We quickly took some outside shots of each other. The backside of my head. I really loved my glittery bow so much!

Then went inside, where we met up with Katie, Fly Away Fashion’s owner and designer. She looked amazing in her pink dress with layers and layers of chiffon! After a short while, a huge group of Lolitas walked in. They had all come together by train. Suddenly the whole room was filled with beautiful girls (and some beautiful boyfriends too)!
One girl after the other paid her admission fee and then walked up the stairs, to the hall which was decorated in a lovely, Christmas-like style. When I got upstairs I had to wait for Cat for a while and we sat down at table in the back, next to a table displaying FAF items. All kinds of Lolitas slowly entered the hall. I always thought our community mainly consists of Gothic Lolitas, but there were also quite some Classics and Sweets. I talked a little to people I knew (which weren’t many), I could hug the birthday girl Helene and say hi to amazing Josine. After everyone finally had settled down, Katie welcomed us and talked a little about the program for the day and the new Fly Away Fashion items. First there would be tea and some sweets, shop browsing time, then the outfit contest, then a small lottery and at the end the group picture. In between we could get our picture taken in a lovely corner in the back by a photographer! ^^
While we waited for tea, I talked a little with the girls at our table. We had two free seats, but later our table got quite popular. XD
I’m afraid I don’t have a lot of pictures, because I hate to flash and the light circumstances weren’t ideal, so sorry. ^^’
After our tea we went downstairs to browse both the FAF store and the cute store Katie’s mother owned, filled with the cutest decorative and scented things. We all talked with each other and took pictures. Of course I had left my camera upstairs. But I did meet some more people. ^^
We went upstairs again where we ate some sweets. I only ate chocolate cake, which was really nice.
I met a lot of wonderful people and we had the most funny conversations. We already made up the plot for a Lolita drama series and a musical and I got engaged to someone (the wedding got cancelled not long after unfortunately). XD
After more talking, having some pictures taken and some more talking it was time for the outfit contest. The contestants had to introduce themselves and tell something about their outfits. First up was Cat, then me, then Josine dressed in a beautiful combination of black and gold, then Anne (a girl I didn’t know yet) in her handmade Christmas dress and then Liselotte in pink and lots of flowers.
Not long after the votes were counted and it was time to announce the winners. I got last place. XD I won a sweet scented bath set. ^^ Anne was fourth place, Cat third, Liselotte second and Josine won! She won a high waisted skirt made by Fly Away Fashion, from one of their two ongoing series. I would have loved to get a skirt from their ‘Letters to Paris’-line! >_< ♥
Then it was time for the lottery. I actually won a prize too! I won a pair of tights and a pair of socks of choice, yay! I chose some beautiful tights with a lace pattern and socks with music notes on them.
After the lottery we took a group picture outside (I kept my coat on, no way I wanted to catch a cold) and there was some salty food inside like quiches and pizza parts (very good). We also took a picture with all the outfit contestants. From left to right: Josine, Anne, Liselotte, Cat and me.

The Tea Party was coming to an end and people slowly headed home. I talked to some people I hadn’t talked to before and I finally got the chance to take some pictures of and with people!
Cat, Dieuwke (who would return with us) and me wee some of the last people who left. ^^ The Tea Party had finally come to an end. I had loads of fun and I am already looking forward to the summer edition! ♥

Thanks to the photographers for taking these pictures!