When Dolls Freak You Out 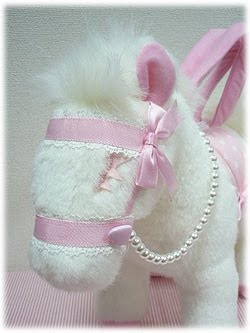 As a little girl, I had quite a few dolls. I loved them very much and I played a lot with them. They were really sweet and they all had names I carefully chose for them. But gradually, my love for dolls weakened as I grew older.

I’ve been on Tumblr for a while now (since January this year) and I’ll be honest: I am completely incredibly over-the-top hooked to it! I get to see lovely Lolita pictures everyday and I “meet” people with the same interests as me. I get to reblog all kinds of prettiness and it cheers me up after a long day of work (most of the time). Of course, I don’t only encounter Lolita-related pictures. I also see pictures related to the other interests of the people I follow, including the subject of dolls. I see tons of beautiful and perfect pictures, from cute carnivaldressed Blyths to gorgeous Gothic Pullips. But, I just can’t help it… Dolls don’t really appeal to me anymore. Sometimes they even scare me.

Lolitas are often compared to dolls and I mostly consider this a compliment (since, to me, dolls are most of the time perfect and beautiful). Many Lolitas also have a hobby or interest in dolls and like to collect them and photograph them. I think this a very nice and quite unique hobby, but I’m not joining. Dolls just aren’t for me and I’m sure there are more Lolis out there like me that just aren’t into dolls. But what are we supposed to cuddle and photograph all day now? Fear not, my dear frilly friends, for there is a second option!

Stuffed animal bags! I have to admit that I just love stuffed animals!
I gave my dolls to charity this year, but I don’t think I’ll ever be able to do that with my beloved stuffed animals! I love their soft fur and sweet expressions. Maybe that’s why I always fall head over heels in love with Angelic Pretty’s stuffed animal bags. Here are some of their different animal bags and come on, aren’t they adorable? 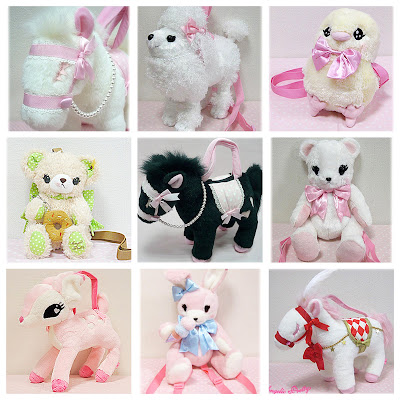 I love them all so much! They are super adorable and I just want to hug them right through my screen! My absolute favourites are the pony bags and I shall not rest before I own at least one! Preferably two. Or three.

If you’re not a fan of dolls but still want something to cuddle, a stuffed animal bag is a great idea! Angelic Pretty is not the only brand that’s been making stuffed animals (think of Baby’ Usakumya), there’s a stuffed animal for everyone! ^^ Let us celebrate their furry sweetness~!

I sincerely apologize for not posting anything in such a long time! My life has been so busy up until now, which resulted in lack of time and inspiration. Thank you for all your support though~! And thank you to all my new followers! ♥
op 7:40 PM
Email ThisBlogThis!Share to TwitterShare to FacebookShare to Pinterest
Tags: discussion