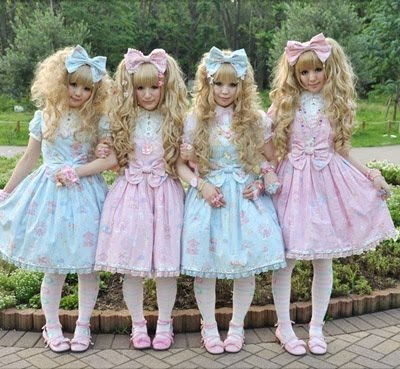 It can be considered a fact that in the past months, maybe even the past year, OTT Sweet Lolita or just Sweet Lolita has become very popular. Although I personally think there are about an equal amount of Gothic, Sweet and Classic entries on Daily Lolita, many people say Sweet Lolita is taking over and they regret that. Secrets saying ‘I hate Sweet Lolita’ are frequently posted to loli_secrets, hoping to find some recognition with fellow Lolis.

Sweet Lolita’s most popular brand Angelic Pretty has a lot of different sweet prints. A lot of their printed dresses have gained popularity and are very, very wanted. Ask a few AP-loving Lolitas what Angelic Pretty dresses they’d like to own and they will name several prints. There will be similarities in their lists, probably including the incredibly popular Sugary Carnival. Because of this popularity, a lot of the same dresses are seen on pictures. Even though they differ in colour, they are the same prints. Some girls even like to wear the same outfits, aka twinning. Because of this phenomenon, the concept of ‘AP Clones’ was invented: multiple girls wearing the same outfits (or at least outfits that really look the same) and even the same wigs and make up.
The opinions about this are very divergent: some people think twinning is adorable. Some people think it will make you feel more comfortable, because you and your friend(s) look exactly the same. But there are also people who think AP clones are creepy, because the girls resemble a little army that can take over the world at any time, turning everyone in a pink cupcake covered in bows, spinkles and sugar that will make your teeth fall out!

Okay, maybe not. But the thing is that the term of AP clones is often referring to the kind of Lolitas that only wear brand clothes, dislike you when you don’t follow the rules and look down on you for not wearing a wig. They often look like living dolls, with huge eyes and a bit emotionless faces.
Lately I have the feeling that ‘AP clones’ can also stand for girls who generally wear Angelic Pretty. Because of the popularity of the prints, the same dresses are often seen on pictures (like I wrote earlier). Because of this fact, AP girls are being accused of being unoriginal, because they wear the same dresses with the corresponding socks, head bow and accessories.

I do not agree with this. I noticed that a lot of interesting coords are getting posted and there is definitely originality all around. I’ve seen amazing coords with several different Angelic Prints that looked so incredibly amazing!
I don’t mind if not everyone loves the Sweet style. Not everyone feels comfortable with bright pastel colours and wigs filled with bows, stars and ribbons. Every Lolita has the right to take whatever style she likes and feels comfortable with, wether that is the darkness of Gothic or the elegance of Classic. But I certainly don’t like it if we, the Sweet Lolitas, are being called ‘unoriginal’ or ‘clones’, just because we really like the same clothes.

And you know what? If I’m an AP clone, so be it. I love Angelic Pretty and I love a lot of the dresses. I don’t mind if I wear the same dress like someone else does, because I want to wear the dresses I like in the coords I like. And there always problems anyway: if you’re trying to be ‘too original’, you’re a ‘special, unique snowflake’.
Although I still think we all are.
op 10:30 PM
Email ThisBlogThis!Share to TwitterShare to FacebookShare to Pinterest
Tags: discussion