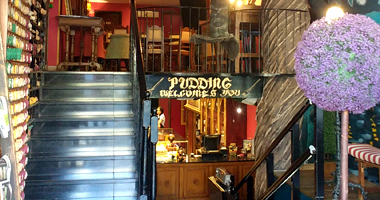 Our second day in Barcelona was planned to the brim with fun activities. For Josine and me it was our only day we could do some sightseeing or do other, event-unrelated things. My only wish was to see the Sagrada Familia and I was fine with anything additional. Isa had a lot to do in the morning for the event, so we ended up going out with her boyfriend Josh, who had arrived the evening before as well. He is a really nice guy, so of course that was no problem.
First we walked to the nearest metro station to buy some public transport tickets. In the end it wouldn’t have been really necessary, since we didn’t make use of public transport that much, but we thought we would so we did. So we bought some tickets and then walked to the bus stop, from where we drove for about ten minutes to our first destination: the Harry Potter café. 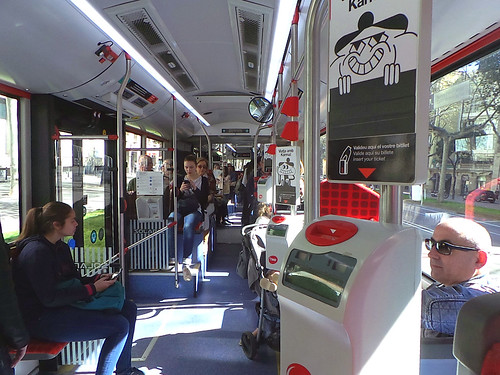 Taking the bus in Barcelona.

Although this café isn’t literally called that, but instead bears the name of the ‘Pudding Coffee Shop’, but everyone knows it as the Harry Potter café. With reason by the way, because it is fully Harry Potter-themed. The café must have done some great business during the days surrounding Omnia Vanitas, because apparently a lot of Lolitas went there! Including us, haha. ^^
Apparently, Barcelona has several really interesting themed cafés. We visited two during this trip and if we had had more time, I would have loved to see more of them!
While we were waiting for our friends with whom we would meet, Josine and I took some outfit pictures. Josine went all out during our entire trip, while I went for casual and colourful when Japanese Fashion wasn’t required. 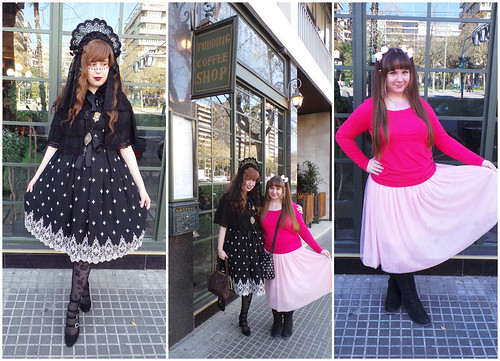 Soon our friends arrived and we all started taking pictures of the lovely café. From the outside it looked very promising already! 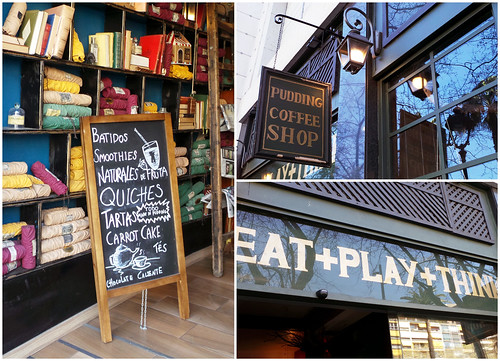 The outside of the Harry Potter café.

We went inside and were pleasantly surprised by the beautiful surroundings. On the right, next to the window were some cute seats and in the floor there were windows to the room downstairs. Right next to it was a beautiful painting on the wall, of the little boats on the lake floating toward Hogwarts. On the left was a big wall filled with books and other items in the house colours and across from the entrance there was a set of stairs, one leading downstairs to the check out and pastry desk, one leading upstairs to what looked like a cosy little library filled with tables and chairs. 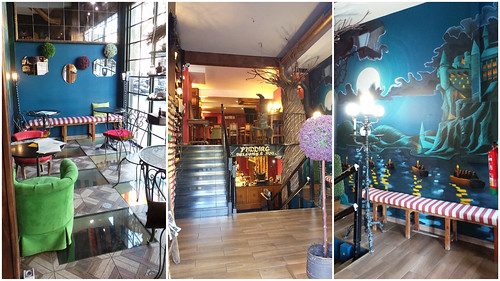 Some pictures I took of several sides of the café.

We all sat down at a big table (we were with about six or seven people) and checked out the menu. Either I was really in the mood for cheesecake or I had heard they had a really good one at this café, since I went with white chocolate cheese cake. And hot chocolate with marshmallows. As you do.
I had a feeling our waitress wasn’t in the best mood and I felt like it was because she had to try and speak English with us. This is purely based upon my own gut feeling (and that of my friends), but well. You’d expect the opposite in a touristic city like Barcelona, but well. Like I said; just my gut feeling. Anyway, we ordered and just chatted until our food arrived. 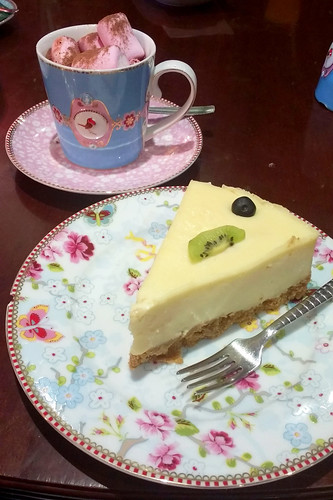 Besides the slightly grumpy service, the food was absolutely divine! The combination of hot chocolate with (slightly huge) marshmallows and white chocolate cheese cake was incredibly heavy, but so good! I couldn’t even finish the cheese cake, I nearly cried because I wanted to anyway because it was so good! XD
We had a great time just chatting and eating, but all good things must come to an end. We collectively went downstairs to pay, but not before I had taken a look at the room downstairs. Which turned out to look like a mixture of the Great Hall and a lovely common room. 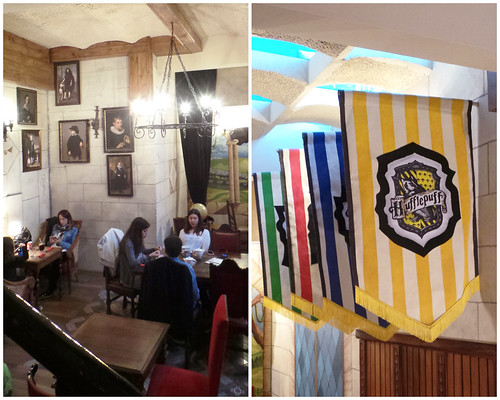 This café was just too cool to be true!

Sadly, when we went to pay we once again encountered the rather rude behaviour of the waitresses. Apparently it was impossible to pay separately, so we all had to scramble around coins to pay together. Naturally, this isn’t a huge deal, but the way it was handled was just… not very friendly. We all did receive a cookie afterwards though. That was nice I guess? XD
Josine and I said goodbye to our friends and together with Josh we went on our way to the Sagrada Familia! I had no idea what to expect, but what we encountered I definitely didn’t expect, haha! After we had walked for a bit, we soon walked around a corner and there it was: the world famous Sagrada Familia. 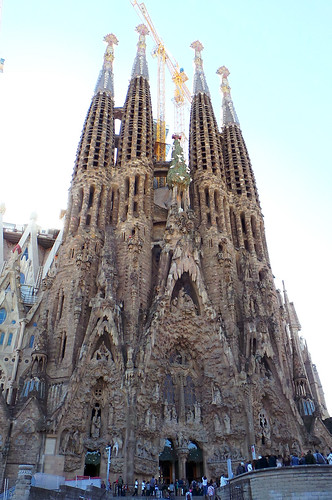 However, it was not only surrounded by apartment buildings, but also by tons of construction buildings and cranes. Now I know the Sagrada Familia is famous for never being finished, but I didn’t expect the place to be such a mess. But not only that, the building itself was just… not my taste at all. I just thought it honestly looked really ugly, I’m so sorry. It looked as if it was made of melting mud… Also, it was just dripping with tackiness! There was literally written ‘Gloria’ all over it, I mean!?
Now I have to say that apparently, from a bit further distance and from the back, the building seems to be much prettier (from what I’ve seen on pictures). And I could see some of the statues were kind of beautiful. But all in all it looked like a brown melting Christmas tree. Maybe someday I will revisit it and be able to appreciate it more? I hope so! 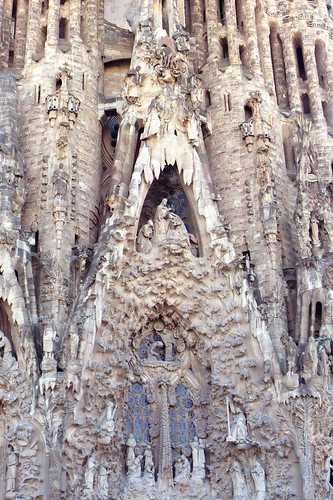 This close up is kind of nice.

I deliberately chose the most appealing pictures I took, since I’d like to portray the Sagrada Familia the best way I can. XD And naturally, a selfie to prove I was there. 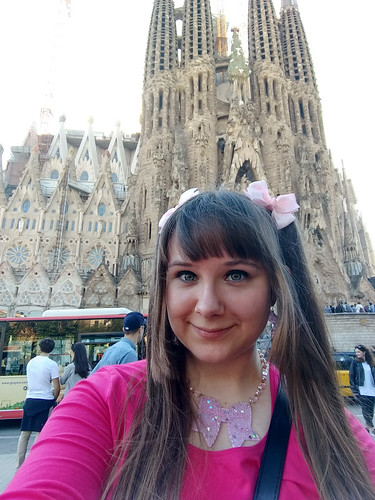 Look, I actually did stand in front of it!

We didn’t have time (or money) to go inside, so we started walking back to the apartment. There we would meet up again with Isa.
Back at the apartment we chilled for a bit before we headed to the Mandarin oriental Hotel, where we would meet with a big group of people for lunch/tea. To kill time I stole Isa’s shoes to try them on because they were just so amazing! 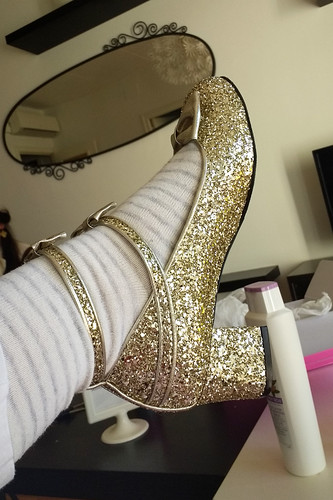 We then took a taxi to the Mandarin Oriental, where we met up with a big group of Lolitas. Most of them were either from the UK or the USA, which was really cool! I met a lot of nice people that day. ^^
We walked all the way through the hotel to the big, modern-looking fancy room of the Bistreau Ángel León, where we were sat at a long table. Although modern isn’t quite my style, this place looked rather cool. 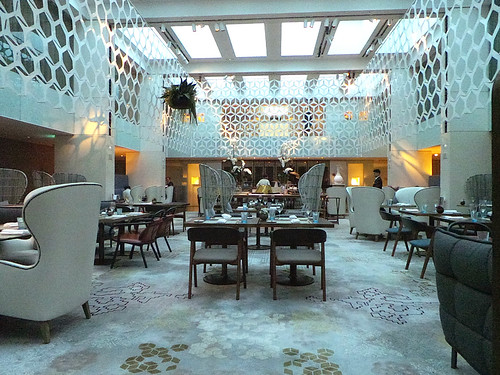 This place reminded me a bit of a beehive.

While we were chatting, we looked at the menu. We could pick a drink, a savoury dish and a pastry. The options all sounded quite appealing. 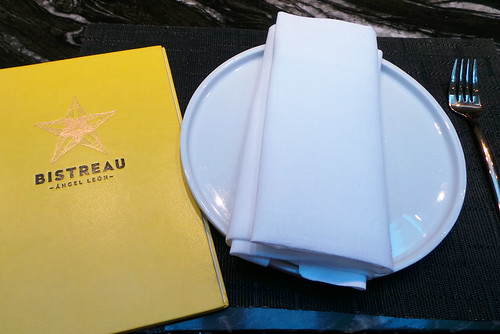 I had a hard time choosing (as always) but went with a glad of fresh orange juice, a salmon bagel and a chocolate pastry. I don’t remember whether we waited for a long time, but we chatted merrily with one another so time passed by quickly anyway.
Finally, our food arrived. Some people had chosen really fancy teas, but I was just as pleased with my delicious choices! 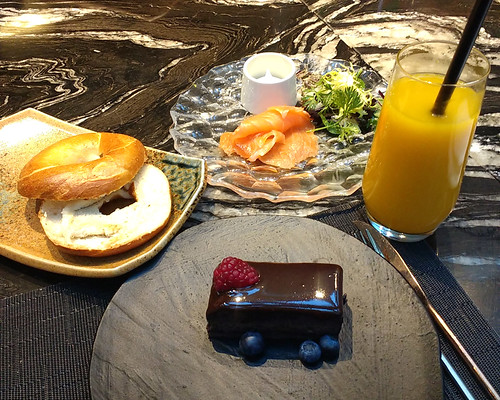 I ate a lot of good food that day!

Before we knew it, it was time for Josine, Isa, Josh and me to leave. We were going to help Magda, one of the Spanish organisers, at her Lolita shop, Madame Chocolat, to prepare some things for the event the next day. We said goodbye to everyone, went to pay and then went on our way by foot, since the shop wasn’t very far.
After a while we arrived there. The shop was small but very cosy. 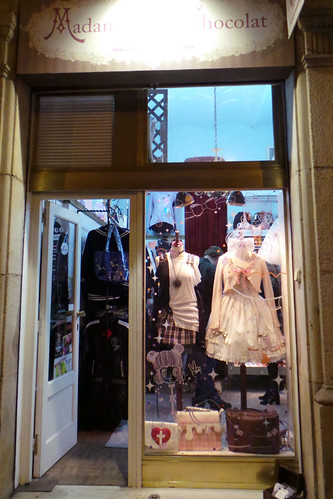 Josine and I browsed the shop for a while Isa and Magda discussed some things. The shop sold a large variety of items. From magazines to accessories and from bags to blouses. Some blouses were just so lovely, I didn’t dare to look at them too much! 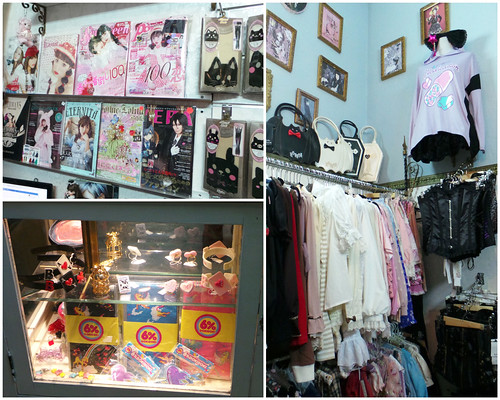 Some pictures taken inside the shop.

In the end Josine and I weren’t necessary after all, so while Isa and Josh went to buy some things we returned to the apartment and prepared some things for the next day. When Isa returned, we prepared some price tags for some of the brands and then it was time to go to sleep. The next day would be quite an intense one!