A Few of My Favourite Things: Cupcakes 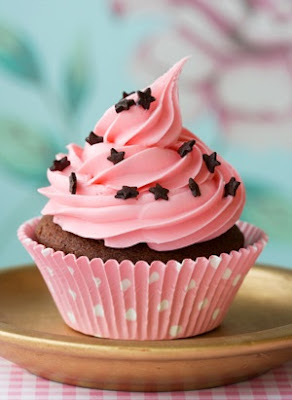 Wow, I haven’t done this in a while! I missed writing about my Favourite Things! ^^

I am no kitchen princess. There, I said it. I once managed to ruin a Sacher Torte by misreading the recipe (I put in way too much water) and the batter turned into what ressembled a filmset for a movie that takes place in a rotting swamp. Yes, it looked that terrible! Since that incident I didn’t want to bake anymore, feeling so ashamed for misreading the instructions and especially the amount of water. But somehow, a little while ago, I turned a switch in my head. All the beautiful (cup)cake pictures that appeared in front of me on Tumblr convinced me to try it again!

I’m glad I did, since I discovered I love decorating cakes and cupcakes! For my birthday in December I made cupcakes for the first time and they turned out pretty good! I bought two boxes with pre-made batter for cupcakes and after they were done, I decorated them with self-made roses and flowers. Since then I’ve also decorated three cakes: one for Christmas (white with green and red stars and little white pearls around them), one for Spring (green with yellow and pink flowers and chocolate thingies) and one for fun (it had a water theme). They didn’t only look cute, they also tasted great! ^^

I would love to make more cupcakes in the future, like the one in the picture. I haven’t tried that yet, but I really want to! I also want to try more recipes from cookbooks. Maybe I’ll finally get better at cooking? ^^
op 6:15 PM
Email ThisBlogThis!Share to TwitterShare to FacebookShare to Pinterest
Tags: favourite things